Alas, all good things must come to an end. It was an early start as you are meant to leave the campground by 10.00am and it was going to take some time to pack up the caravan and dismantle the tent. After breakfast in the caravan, the girls tackled the inside and made sure everything was secure whilst the boys pulled the tent down. It did take us nearly two hours to get it all sorted but two of us were not that familiar with the techniques required.

We also took the time to clean the car windows as they were covered in sea salt but it was also noted that the beautiful tree we had set camp up under, threw down globs of sap – yuck. It took a while to scrape the sap off the windows but more work required later on for the rest of the car. 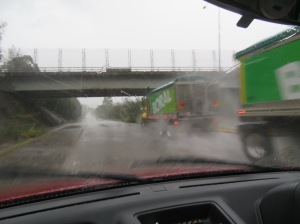 It was then time for us to bid a fond adieu to Carol and Pete who had been great camping companions and who hopefully in the future we will get to share the experience again. We followed the guys out of the camp ground and less than ten minutes into the drive the heavens opened. We were indeed lucky to have got it all packed up before the rain hit. We lost the guys on the highway heading down towards Newcastle as the roads were awash with water and there was no way Suzy Suzuki was able to keep up with the stream of traffic. Carol and Pete were heading back to Maitland so we knew we would get separated on the highway. It was very unpleasant driving and not in the least bit enjoyable. We kept going from one huge rain squall into another for over an hour. 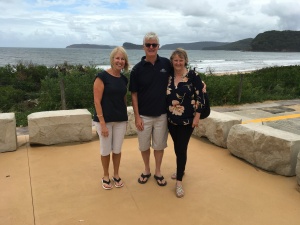 We stopped in at Woy Woy which is a coastal town about an hour north of Sydney to see an old friend of ours, Megan and James. Megan and Fraser go back to their late teens in Canberra but over the last 29 years we had lost track of what her and her husband James had been up to. They now have two grown daughters who are mostly off their hands and are now empty nesters. Like us, they have the dilemma of elderly parents and for Megan the last two years have been tough sorting through family issues. Hopefully now that we have reconnected, it will not be another 29 years before we catch up again.

It was back on the road to Sydney which took us another hour and a half. We use to do this road all the time when we were living in Muswellbrook as we would come down to see friends, wine and dine and pick up lots of stuff for our renovations. Many a time we dragged the trailer up and down the F3 freeway which for some reason they have seen fit to rename the M1.

We have invited ourselves to stay back with Darryl and Sue in Abbotsford Cove for the next two nights as we want to catch up with Fraser’s nephew Alistair who moved from Adelaide to Sydney to start his uni about a month back. Darryl and Sue have offered to be his “get out of jail free card” should he get into any difficulties which is a lovely thing to offer. So plans are afoot to introduce them to one another. Sue and Darryl had plans to go out to a musical in the city so we had the place to ourselves and Tiffany to keep an eye on. She was so excited to see us and she certainly remembered us from our time here before. We just used the evening to catch up on some washing and some blogging and giving Tiffany lots of attention.