This site is a blog by Fraser an Ozzie and Diane a Kiwi who ended up in Canada and are now also Cannucks. For the summer of  2016 we are taking a bit of time off work to tour around England on a narrowboat called “NB Lucy”. Part of our crew also includes our two deck hounds Maples and Toque of the four legged variety. Hope you enjoy our ramblings.

How did we discover narrowboating.

In 1991 we threw in our jobs in Sydney, Australia and rented out our flat and headed overseas for a gap year.  We were in our early 30’s so would be considered late bloomers when it came to taking a gap year. It was on this trip that we first saw a canal boat on the Kennet and Avon Canal and decided we needed a holiday within a holiday. From that point forward we were smitten. We hired NutHatch, a 24 footer from Alvechurch Marina and did the Llangollen. We have since made several return trips to England and done the Four Counties Ring, part of the Grand Union and the Llangollen again. As all people who hire narrow boats learn, you are always pushed for time and don’t get the chance to relax and enjoy your surroundings and the experience of living aboard.  Hence our decision to do a four month stint this summer.

Our intention is to spend four months this year (June to Sept 2016) focusing mainly on the northern canals through the counties of Staffordshire, Cheshire, Yorkshire and Lancashire as well as the cities of greater Manchester, Liverpool and Leeds.

Travel on a narrowboat is rather slow at around 2 miles an hour with around 3 hours cruising per day, so we are not going anywhere fast.

For those not familiar with narrowboating the history goes something like this.

During the industrial revolution in England it became increasingly important for industry to find ways of moving raw materials and finished products around England and particularly to and from ports that had access to the sea. In the early part of the revolution there were no railways and horse and dray were too slow, so ingenious engineers set about building a network of narrow canals (complete with locks, lift bridges, aqueducts and tunnels). Narrow boats (pulled by draft horses originally) were deployed on the canal network to transport the goods with most narrow boaters (and their families) living onboard. 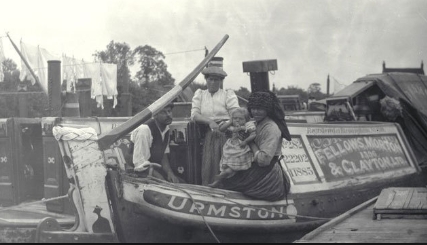 The extent of the network built was quite remarkable. Of course with the advent of the  railways from the 1850s onwards the system soon fell into disrepair. From the mid part of the 20th century their was not much of it left. Fortunately a resurgence of narrow boating as a recreational past time came into being and today there is 2000 miles of canals within England.

Here is a link to a map of the extent of the current system.

We are in a position to host and entertain a few of our friends on board during the Summer of 2016 (June to Sept) , whether it be just for a couple of days or a week at a time. If you are interested in joining us, just email us at rowkin@telus.net

Confirmed so far are :

Keep in mind it is a slow trip, though there is plenty to do in keeping us moving whether it be steering the boat, working the locks (yes we do it ourselves – by hand !), preparing meals and running errands into the next village to get supplies. We will be doing a few “off canal” short exclusions and generally exploring whatever is on the way or around us.  We may even find a pub or two ! Remember that England has a propensity for much precipitation so please pack good waterproof shoes and wet weather gear.