Farewells this morning to Pat and John and promises that next time it will not be 16 years before we next see them again!!!

Our route up to Muswellbrook today took us through some very tiny towns and what you would call the mid west ranges of New South Wales. The state has been in drought now for three years but as we drove through it appeared quite green. We are told it is only because of some recent rains and that they are in a green drought – interesting term. 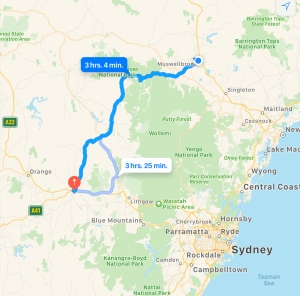 J
As you are about 10 kilometres west of Muswellbrook you start to see the enormous spoil dumps from the Mount Arthur Mine. Fraser worked at this Mine and designed the future pit and knew it very well. He was rather taken aback as to how large the dumps were and we learnt from our friends that they were not meant to be that high. Mount Arthur is now the biggest Mine in the Hunter Valley whereas when Fraser commenced work for them they were the smallest and not likely to survive. They were very fortunate and awarded the Mount Arthur lease.

A number of other mines have also opened up around the town and it is encircled by them. Many people who work in the mines do not live in the town but commute from anywhere up to 130 kilometres away towards the coast. Hence, the town has grown very little. Dust is a huge issue and as we were driving in you could smell and taste it.

We won’t go into the politics of the area except to say that not that long ago it was citizen against citizen over the closure of one of the long standing coal mines of the area that employed 600 people. It did not close due to lack of resource.

We got into Muswellbrook about 3.00pm and drove straight to Kerry and Craig’s house who were eaglerly awaiting our arrival. Di last saw them in 2003 whilst Fras saw them in 2008. When we left to go to Canada their twins Alexander and Isabel were babes in arms. They are very special children as Kerry and Craig went through incredible hoops to be able to have them. They are now both 16 and of course unrecognizable to us.

Craig and Kerry’s place as of today.

Our home just before we moved to Canada.