Today, B1 and we drove south down the Mornington Peninsula in her Kermit Green hire rocket. There has been some dispute as to what the colour is between Barb and Fras but it does make it very easy to spot in a parking lot. We decided Suzy Suzuki could have a rest today. 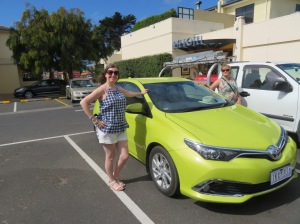 After a full night of pasta we were all a little slow to get going. Our plan was to be on the road by 10.30am but it was like herding cats this morning and that involved getting Henry in off the porch where he tried to imbed himself.

The Mornington Peninsula is at the end of the eastern side of Port Philip Bay. It is an area where the Melbourne elite holiday in their small beach shacks and retire to.
You can see just how narrow the entrance is to Port Philip Bay but also how the bay I s very protected.

The purpose for our trip besides taking in the beautiful coast drive was to meet up with one of Di’s neices and her family for lunch. Anna is the oldest of all the neices and nephews and is married to Richard with  their children Taylor and Hunter. 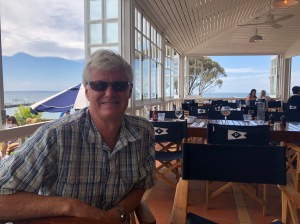 We met at the Portsea Hotel right on the tip of the Mornington Pensinula under a beautiful blue sky. The hotel has just undergone a $7million refit and it was gorgeous. 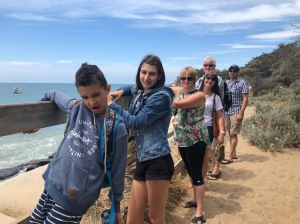 We all ate well as you do and then all waddled down to the beach just below the the hotel. 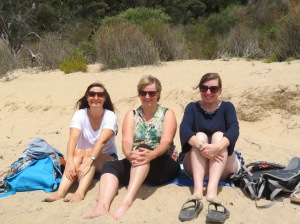 Fraser was trying to impress the bevy of beauties (Anna, Di, Barb) on the beach by saying he had found some mermaids – he is up to something!!!

We were all very naughty and sat on the sand for over an hour with no sunscreen or sun hats. Hunter, Anna and Richards six year old played in the surf with his clothes on as all kids do making mum and dad not so impressed with all the wet sand that would be dragged into the car.

It was then off to yet another eatery but by now it was about four hours since we had last consumed so didn’t feel quite so guilty.

It was a great day and had it been that bit warmer we would have gone for a swim as the colour of the water was just superb.