This morning Al and Jen got to bid us a farewell, for a while!! We will be back to haunt them in a couple of weeks. We are going north to a suburb called Ocean Reef to stay with some really old, old buddies of ours, Gayle and Paul. They hark back to our Sydney days between 1988-1991.

Paul worked with Fraser at his first consulting job in North Sydney. The company which they were employed by, was what we will call a little unusual. Paul was Fraser’s mentor for the two years he worked there. Paul, his lovely wife Gayle and there two girls Heather and Gill moved to Australia in the mid 1980’s from the US.

We spent a lot of time with these guys in Sydney and especially sailing the harbour. There are many a stories to recite of our near death experiences with Paul and his misunderstanding of ships under motor giving way to sailing boats. Paul felt that all ships under motor should give way to him and this included the huge Manly Ferry. This is like saying that Dover or Vancouver ferries should give way to a small 30 foot sailing boat. Many a time we were given a salute by other crews that wasn’t something you would find in a mariners handbook!

Our good friend Nick’s dad was an Admiral in the Australian Navy based in Sydney and owned his own beautiful wooden boat, so Nick knew a few things about sailing. After a New Years Evening on Sydney Harbour with Paul and many of our other friends, Nick kissed the ground when we got off the boat!!! This is an adventure non of us on the boat that night will ever forget and every New Years Eve we all have flash backs!!!

So, we are heading up to their place to see what awaits us and no doubt a damn good time. They have an amazing home that has a view of the Indian Ocean. 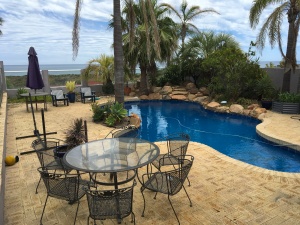 We spent the day with them having a good old gas bag and catching up with one another since we last saw them in 1997. They are also retired and enjoying life to the max. They are keen campers and head to the outback frequently in their swishy new purchase.
Yeap Tom, this is the same brand as your camper. Tom follows the blog and he is also a keen camper in the outback. 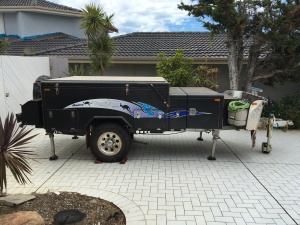 Di is having her doggy fix (Simon, please do not let Toquie see this) with Remy who is an eight year old Schnauzer and is a sweety. 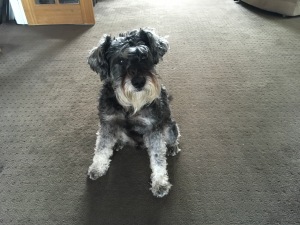 We trained into the city and had dinner out and then went to the Laugh Resort which is a standup comedy club. Laughing wasn’t comfortable for Di with the old ribs so it was back onto the drugs when we got back home.