And the person with the right answer to our quiz question from yesterday was Fraser’s mum, Barbara. 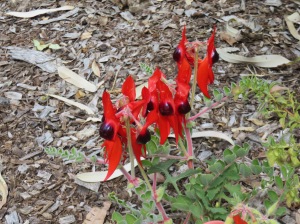 It is indeed the Sturt Dessert Pea which is the floral emblem of South Australia. Better make it next time that no Aussies are allowed to partake in any competition questions relating to Australia.

So, today involved us being chauffeur driven by Gayle down to and around Fremantle. Neither of us had been there since 1992 and there has been a lot of regeneration that has occurred. There are some very ornate and decorative buildings there which are quintessential Australian in flavour. 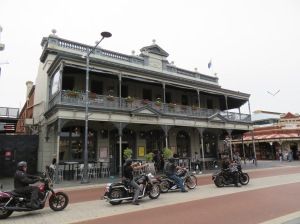 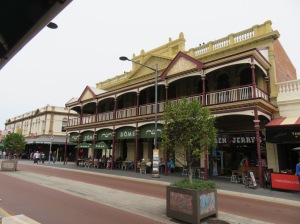 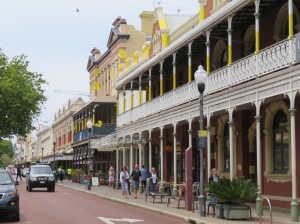 Fremantle is a major Australian port city in Western Australia, located at the mouth of the Swan River. Fremantle Harbour serves as the port of Perth, the state capital. Fremantle was the first area settled by the Swan River colonists in 1829. It was declared a city in 1929, and has a population of approximately 27,000.

We wandered along the foreshore and checked out a few of the sites. 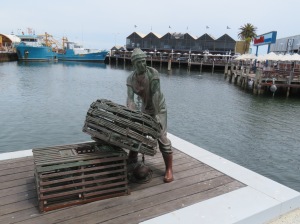 We were living in the Pilbara in Northern Western Australia during the 1980’s which was a huge boom time in the state due to the resource sector. It was also the time of chest beating and pomposity of a gentleman called Allan Bond who was a well known West Australian entrepreneur. He was also notable for winning the America’s Cup off the yanks in 1983. 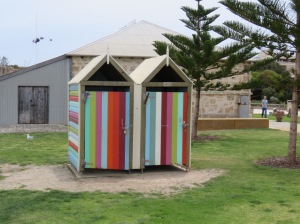 Some cute changing sheds still in use along the beach. 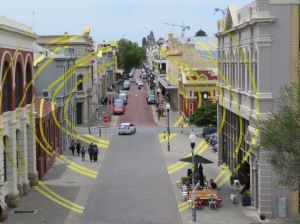 Now this is really cool. One of those arty farty types came up with this idea which is just brilliant. On the buildings it is actually stuck on so can be easily peeled off. There must be lots of places around the world where this idea would work. 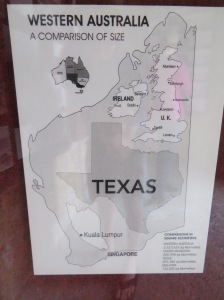 Now this is a good idea to give you some idea as to just how large Western Australia is. The folks from the west are very proud people but have always felt isolated from the test of the country as well as the world. It always use to be so expensive to come over this way from the rest of Australia but now with more competitive airlines it is much easier. We do remember, and it still goes on, that Western Australians always refer to anyone east of the border as those Eastern State bastards! Factoid: Perth is the most isolated city in the world. 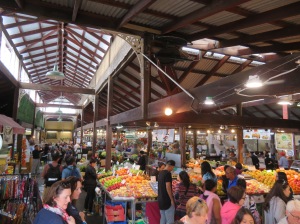 Spent a few hours wandering around the Freo markets before heading back towards home but not before Gayle took us the scenic route home. 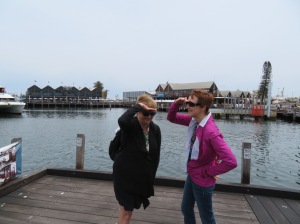 The girls pretending to look out to sea -obviously, both directionally challenged! There were quite a few life size statues along the foreshore which were well made and depicted workers of days gone by. 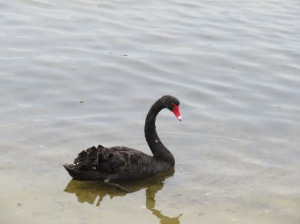 The black swan is Western Australia’s bird emblem and it is said to be found as far north as the Kimberley region. Their character is the same as the white swan which we encountered a lot on the canals in England where they would come and tap on the kitchen window wanting to be fed. They scared the hell out of Maples and Toques as they were quite aggressive towards the girls.

We got home where Di and Gayle went on an hours walk with four of Gayles good girlfriends. They were very kind to Di as the walk which they normally did in an hour they did in an hour and a half for her. She’s not the best walker by any means but gave it a go. Fraser went off with Darren to play a game of golf.

In the evening, Gayle and Darren had arranged for their good friends to come around and meet us and they had also quietly organised for our long time friends Allan and Jenny to join us as well. We go back 34 years with Al and Jen and will be staying with them next week where we are sure they have organised some high jinx for us to get up to. It was a brilliant evening and so nice to meet such a great group of people.