Our last full day in England and our final day of the European Odyssey 2017!!!!! We are ready to go home now, but not to become couch potatoes!

The end of Phase 12 came to a conclusion with a breakfast of porridge and toast on Ange De L’Eau and laughter and sadness around the morning table. We made sure that before we disembarked that we left the guys with a strong memory of our presence (sorry Nick, more toilet humour) and a very +++++ full cassette. Something to remember us by, Wolfgang and Marlene.

The next 24 hours sees us using the following means of transportation to get us from Irthlingborough to home in Calgary:

We walked with Marlene and Wolfgang to the bus stop dragging our accumulation of bips and bobs over the last four and half months which doesn’t add up to much. It was a tough goodbye hug!

Onto our sturdy stead and headed upstairs to get a good view of the surrounding countryside.

Thankfully so locals took pity on us and advised us when to get off the bus so it was quick clamber downstairs and tumble out the front door of the bus.

We had originally booked our train for 14.30hrs but we arrived at the station at 11.30hrs so asked if we change to an earlier train. We knew there would be a change fee but we were not prepared for a £37 change fee each when each ticket only cost us £18 each!!! Bloody hell, talk about robber barons. We opted to sit the time out at the station and enjoy the ambience of the station and considering we were in what we thought was a very small village, it was very busy. 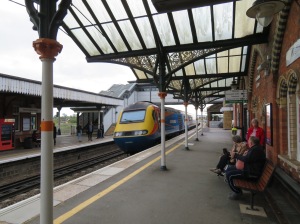 For those of you that can remember our blogging last year about the “Trainspotting” programme we happened upon last year whilst on nb Lucy and the unlimited fun and laughter it caused us, well guess what!!! We had a 66 freight special pull into the Wellingborough Station!!! Stuff that one into the top of your socks! 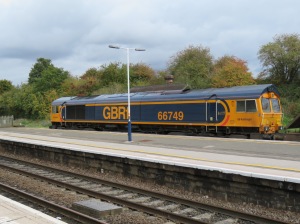 The wait at the station wasn’t too bad as we bought a Times newspaper which made for some very interesting and hilarious reading. We had seen this section on the “Court Circular” which tells you what the Royals are up to for the day including the very minor Royals. This section just jumped out at us though and we must say, some of them have the most exciting and exotic of lives – NOT! 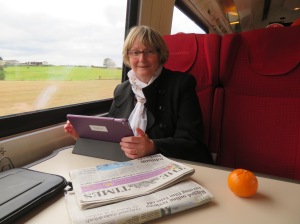 Quote: “The Countess of Wessex (bonny Prince Edwards wife) this afternoon visited Harbour Lights Fish and Chip Shop, Falmouth” – WOW!! No need to say anything more about that little bit of Royal life.
So down to St Pancras Station in London. This particular station is where the Eurostar leaves for the continent. They have put a lot of money into the station due to the fact it is an international departure port. We had time to swap across to the ThamesLink network for our train to Gatwick airport. One of our stops along the way was Black Friars where the station is actually located on a bridge over the Thames. We were able to catch a quick view of a few of the iconic sites of greater London.

You can just make out the Shard and the Cheese grater but unfortunately the guy is obscuring the view of Tower Bridge. Out the other side we could just make out The London Eye. 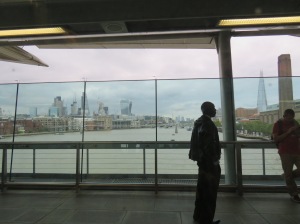 We did for a brief moment encounter the possibility of maybe coming back into the city for the evening to catch a play but after such a long day already our old tired bodies decided that the comfort of a hotel room was too alluring.

The trip down to Gatwick just seemed to drag but we finally made it in at 17.00 hours. As our flight was leaving at 10.55hrs the next day we had decided it would be easier to spend the night at a hotel close to the airport rather than get up at an ungodly hour to make the trek out here. So here we are, on our last evening spoiling ourselves watching Coronation Street and the new series of Doc Martin from our beds – can’t get much better than that!