What a nice day to share together as the sun was out and it was considerably warmer than what it has been. The River Nene is not a fast flowing river by any means and the nice thing is that it is extremely clear. You can see well down into the depths and watch the fish. It is very weedy though so does cause a few stoppages to clear out the weed hatch.

As can be seen, the guillotine locks are rather substantial. Most of them have been electric (thank goodness) though you are still required to open paddles up at the other end of the locks and open the gates as it is the same system as on the small canals. 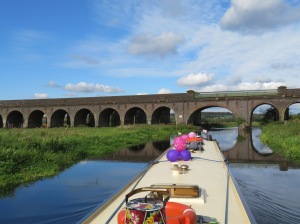 This is the rail bridge that we will probably be on tomorrow on our train trip down to London. This picture gives you somewhat of an idea as to how large the river is.

A couple of keen canoeists who sang Happy Birthday as they went pass as the balloons are still on the roof of the boat.

We have passed by a lot of these smallish horses which are certainly not Clydesdales but look a bit like Shetland ponies crossed with Clydesdales. They are not wild horses but we do not understand as to why they are here. Another boater in front of us by two hours told us he had to recuse one that had fallen into the river when it was rolling around on the bank scratching itself and misjudged where the bank was. It was certainly a Herculean effort for him to be successful in helping it back to dry land. He told us that the horse thanked him profusely by shaking all over him and almost knocking him into the river.

Talking of animals we should update those of you who have asked about Maples and that she is on the improve. We think it is an exacerbation of her arthritis in her hips so some tweaking of her anti-inflammatory medication has had a positive result. As to long term, we have to wait and see but she is 13 years old so she is getting up there now. It makes us realize we must treasure the time that we have left with her. Thank you all for your concerns.

We have had some lovely light this afternoon and Wolfgang has provided us with some of his photos which are stunning.

We have been very fortunate as yet again we have seen another Kingfisher!!! Always very special to see these birds as beside being the most beautiful of colours they are not common. We have always been told that once you have seen a Kingfisher for the first time you are always able to recognize them again as they have a very distinctive flying style.

At the last lock, Wolfgang gave us the privilege to be lock slaves. It is very different getting on and off the boat on a river than on a canal. It is not possible to just jump onto the bank as the banks are uneven and often the landing stations are not always that good. 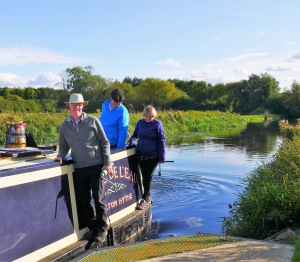 These lock gates a damn heavy buggers but once you get them in motion it is a lot easier.

Mr Lock King!!!! Last lock for 2017 but not the last lock ever!! Plans are already underway for a return to Ange De L’Eau for 2019 with a boat/house swap with the guys.

From now on we have no excuse to dress like slobs so we had better enjoy our last day. We moored in a sports ground area at this place called Irthlingborough and walked into town to check out where the bus stop is as we need to catch the bus back to Wellingborough to meet with our train. We came through Wellingborough earlier today but we decided that we needed to keep moving as the guys only have a licence for 21 days for the river. Any longer than that and they have to buy another licence.

We are not sure if we will get wifi tomorrow as the hotel at Gatwick Airport might not have free wifi and we are too stingy to pay for it. We will have wifi at the airport though.