Well it was truly monumental in the end and what has made us realize this is to how tired and how much we are looking forward to going home. Planning for our next trips will involve taking some of our learnt experiences from the last 145 days. Maybe less time away; maybe more realistic challenges for our older bodies; how to be more than 5% under budget (whoopee); more realization of how many of our friends were so good to us; the best pet and house sitters anyone could ever ask for; and last but not least our tolerant pets who no doubt will forgive us but should not. 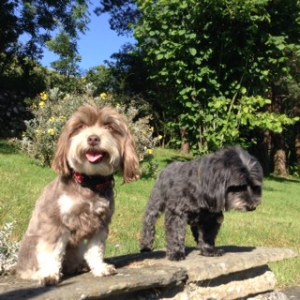 Our final portion of the trip home was uneventful but long as when you know you are on the home straight it never seems to come quick enough. We definitely knew we were heading home to the right place as they announced on our flight that the weather in Calgary included the white fluffy stuff.

We don’t want this next bit to sound like a wedding speech or a eulogy and it is not in any special order but there are a number of people we want and need to thank as without these guys we would not have been able to pull this off and more importantly have had such a great odyssey. When we put our thoughts together it made us realize just how many people there were involved in helping us out in some way, be it from assisting Simone and Joannie should they need any help with the girls or the house to friends helping with our planning and providing their shared experiences.

Just like last year, we spent our penultimate day saying farewell to Marlene and Wolfgang and had yet another farewell on the side of a canal. We blogged a bit too quickly last night to include this great photo sent from Wolfgang. Check out that weather!!!! 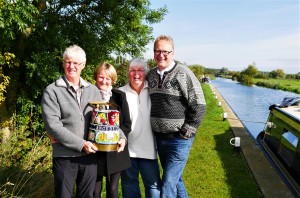 These guys will ultimately regret the day they met us in Etruria in 2016 as many of you know that no matter where we end up in the world we still keep turning up like bad pennies.

Without Elfi and Horst in Germany we could not have pulled off our epic bike rides which in the end unfortunately did not nullify our caloric intake. We descended on them at frequent intervals like two homeless puppies who were fed, cleaned and given sufficient training to get out there and give it another bash. Oh, and to visit lots of beer gardens.

We also dragged the poor buggers down the Moselle River on bikes (electric mind you), a mad cap idea that they would never have dreamt up themselves.

To put the fear of God into them, they have been advised that we will be reincarnating a very cut down version of the 2017 Odyssey in 2019 and that they will probably be forced back into action to set up their kennel facilities again!

Our bike journeys would not have been a possibility if it were not for our great friends the Titterton’s in Hilversum who have a great neighbour called Mark who organised the purchase of us trusty steeds.

We think Mark is now fully educated in the body shape of a stout person. We are sure Ali and Ads have told Mark just how instrumental he was in assisting us with purchasing our torture machines – well in Di’s mind. Not forgetting of course the mighty Titterton’s themselves who were crazy enough to let us attempt to look after their progeny Milla and Ollie – they survived though we discovered just how hard it is to be a parent!!! We of course cannot finish off the Netherlands connection without missing the dog from hell – Bronte the stubbornness muddiest dog God has ever put on the planet. She has made us appreciate our two toilet brushes!!!! 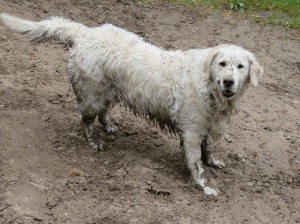 We deposited ourselves on good friends Dewi and Eirian who we met in the Amsterdam Heineken Brewery in 1991 with there two teenage children. We have kept in contact over the years and managed to catch up in various places for very brief stints but this time we were so fortunate to spend a week together in Wales. They took us on a great trip introducing us to the history of Wales and its scenic beauty. We feel like we have a lot better knowledge of their little paradise.

Let’s not forget the French Connection. Well actually the Aussie/French Connection – now that is an oxymoron. We were not sure what the three days in the South of France was going to consist of but it was full immersion into all things French. 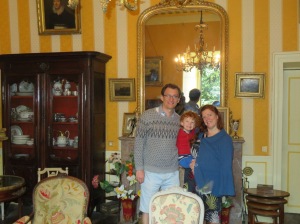 Alas, it did not improve or French but we had a lot of fun enjoying the company of Belinda, Dominque and Alexandre and especially the very kind welcome we got from Dom’s parents and brother. They had never met us before and probably only heard about us on the vaguest of terms but we couldn’t have asked for a kinder reception. They made us feel like a Prince and Princess at their amazing Chateau!

Guess everybody is getting the gist that we have “water gypsy” in our blood. It is a little scary just how easily our holiday on the Brecon Beacons canal came to fruition. 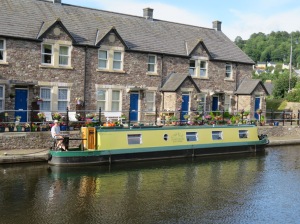 It started as a suggestion and within days was booked and sorted. Wolfgang was the instigator, Fras the strategist, Di the researcher and Marlene the most tolerant and understanding person of these three crazies. 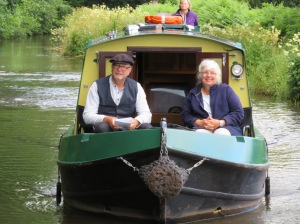 Oh yeah, and who can forget the TransAtlantic crossing with more twists and turns than a Sherlock Holmes novel. At least the additional Baltic cruise went fairly smoothly except the visit by Di to the most expensive medical clinic in the western world in Russia of all places. Patti, Pete, Sue and Steve were all great stalwarts in ensuring that we were kept well afloat and focused on the task at hand. It is pretty cruel what we have dragged Patti and Pete through over the years. This includes Pete and Patti financing our time in Norway – thanks guys!

There were other people we invited ourselves to and very kindly broke some bread with us. Chris and Cath we had only met last year through our great friend Nick and we were very lucky to get the chance to catch up with them again, though only briefly. Hopefully on our return we will get the walk in the Yorkshire Dales happening.

Must not forget the adoption of the Waterhouse family in Wolverhampton and Tipton. This is where the real water gypsy blood starts flowing. The connection is obscure in that Doreen is the mum of Fraser’s crazy ski partner Ian. Ian is the wife of Jan who Di met in the first few months of arriving in Calgary 14 years ago at a Newcommers Club meeting. And a fortuitous meeting it was. Lynne is Ian’s sister and John is the best son-in-law any mother-in-law could ever wish for. 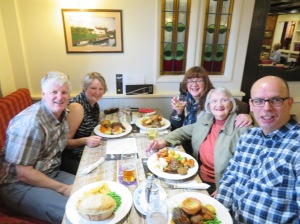 We’ve dragged these guys down a couple of canals now and worked John like a real lock slave of which his very good humour has always prevailed. Maybe another time we can actually have a Ian and Jan in tow rather than 10,000 miles away. Ian, John can show you the in’s and out’s of a windlass.

So we think we have not forgotten anyone. We hope you have enjoyed our ramblings and wanderings.

We also need to let everyone know that Simone and Joannie were set a very big task by us as you all know we are crazy, stupid about our pooches. It’s a job not too many people would be willing to take on as the responsibility is enormous. We also know we took a big risk entrusting the girls and the house to them and many of you thought us brave and stupid at the same time – but guess what, it was an absolute win win for everyone. These two have more than exceeded our expectations and we want all our friends and family to know that. Not sure how long the guys are going to continue doing this house sitting and pet minding caper for but they come with glowing references and we have made some new friends just to top it off. Not even going to bother about mentioning the painting jobs that were done by them for us and our friends as if we do that they will not be able to continue their travels they will be so busy being fully employed in Calgary. 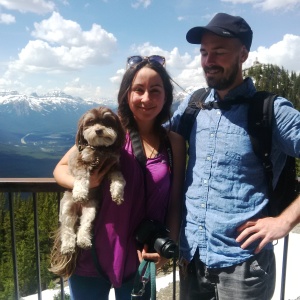 So everyone, after 145 days and an amazing trek through Florida, Denmark, Estonia, Russia, Finland, Sweden, Norway, Holland, Germany, Luxembourg, Switzerland, Liechtenstein, Austria, Wales and England, it is adieu, Bon voyage, till next time and thank you for following our blog and we hope you have it enjoyed it as much as we have enjoyed putting it together.