Have been a little remiss about describing the canal itself.

It is very much like a James Brindley style canal in that it follows the contours of the land religiously rather than the Telford (cut and fill and keep it straight) style. This is not surprising as the Monmouthshire and Brecon canal engineer was Thomas Dadford Jnr, his brother and his father. The father had worked with Brindley on the Staffs and Worcs canal in central England and no doubt learnt his craft there and passed it on.

The canal started life as two separate ones. First construction was on the Mamouthshire in 1792 and then the Brecon in 1793 with the link between the two being completed in 1812. At first both canals run by separate companies were quite profitable providing numerous hubs for trans-shipment of lime, coal and iron between the many tramways that led from the hills down to the canal.

Eventually and with the trade decline due to the increasing efficiency of rail transport the canal companies joined forces in 1865 only to be taken over by the Great Western Railway in 1880. By 1930 trade had reduced to virtually nothing and the canals fell into neglect. Reopening occurred in 1970 after many years of restoration.

What is particularly unique about this canal is that it is neither narrow (6 foot) nor broad (12 foot) like the rest of the English system. It was built for 9 foot boats a curious and unique dimension not used anywhere else. The dimension must have suited the purpose for the canal and as it was never envisaged that these canals would link into the rest of the system so it probably didn’t matter much.

Being a strictly contour canal, there are just six locks at the northern Brecon end. This leaves the rest of the canal as one singular lock less pound of around 23 miles, one of the longest sections anywhere on the waterways.

As mentioned previously, lime stone was extensively mined to put on the pastures but it required heating. Along the canal they have erected some great depictions of what the area was like during the industrial revolution. Even with the amazing setting it would still have been a pretty grim place to live. Imagine what it was like where they mined the coal – yuck!!! 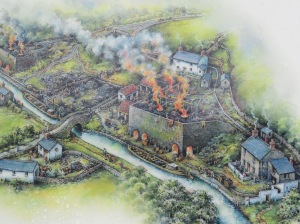 As is always the way it seems that each time we meet another boater it is on a corner. To pass one another involves a lot of reversing and poling. 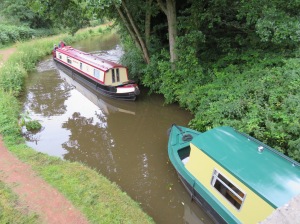 Wolfgang steering the boat and looking quite masterful.

It is the trickiest canal we have ever been on but the lushness of the greenery along the canal is the most beautiful. We have not been through any industrial areas or heavily built up regions. There are a number of small villages to explore that are down off the canal. They have substantial sized horse flies that take quite the junk out of you and at the same time inject something that makes them itch like crazy for at least three days. Di must have the sweetest blood out of all of us as her arms and legs are a mess. She has reverted to wearing long trousers and long sleeved tops even in the hot weather.

After a long day of cruising we made it as far as bridge 47 and due to the heaviness in steering and the slow progress we decided to turn around. We then walked to the end of the canal of about one kilometre and it was a good thing we did, as it really was not navigatable. There was a tunnel to negotiate which was very over grown and the canal looked extremely shallow.

At the very end you could make out the five locks that use to be there. It would take a mammoth effort to get it back to working order and when you think how little traffic there is on this canal it would not be worth the investment. We touched the fence post so to speak.

And a congratulatory drink was had by all.

Our plan then was to return the way we had and do a few more hours of cruising to make tomorrow a little more relaxed as it is our last day together on the boat.