Final touring day in Norway and unfortunately the wettest. You probably need to expect this as it is their spring.
So, overall impressions of Norway:
– It is a stunning country
– It is an easy country to get around
– It is a very prosperous country
– Little evidence of poverty
– No graffiti or litter
– Weather unpredictable and not boring
– Exorbitantly expensive
– Easy to communicate as they all seem to speak English – well all of the young ones that is.
Hints to travelling in Norway:
– Come July or August
– Either win lotto or sell your home
– Give yourself plenty of time
– You could drive around yourself .
Conclusion: Yes, we would come back again. We were here 26 years ago and that time we travelled right up to Nordcap above the Arctic Circle so we have effectively seen it from North to South and mostly East to West. Felt a lot of the time that we were in New Zealand – they even had all the sheep to match.
Our travels today started with a thirty minute bus ride to catch the train. As there is track work going on we are going to be doing a bus, train, bus dance today. Luckily, most of the travel is by train which was very comfortable.

The south west and southern part of Norway is lushly green with many market gardens and fertile farming land. There is many rolling hills, trees and lakes – picture post card type stuff! The map below shows you our starting and finishing place today. 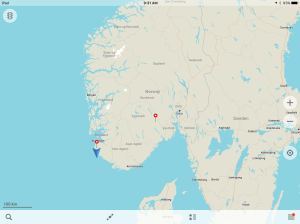 It took us seven hours of travel which wasn’t onerous as the landscape was pleasing to the eye. The entire time we were travelling it was wet so we lucked out in that respect.
Back to the Thon Hotel in the Center of Oslo which is where we started ten days ago. There is a big music festival on this weekend so the place is “a humming”. Think we were very lucky to get a room.
Oslo has a new opera house that they have only recently completed. Very futuristic and appealing to the eye.

There are over 50 museums in the city and they seem to be very big into sculpture parks. Some are truly weird and wonderful and a little confronting.

A note for Patti, Sue, Pete and Steve – Di lost her green lollipop but as fortune would have it she hit pay dirt yesterday!!!!!! She decided she would stock up.