One very busy and looong day indeed. We were off the tub and into immigration by 7.30am. It was all very thorough with everyone of us getting the full head to toe check out by the severely composed Russian guard. Got onto our small private tour and took off to the centre of the city getting some of the history from our very informative guide.

Some of you may know that we were here in 1991 and we swore we would never come back as our experience was not good. But being semi reasonable people we thought we would give it another go. It has improved by 1,000% but for those here for the first time the comments were of how poorly maintained the buildings were and how they were falling down. They wanted to see it 26 years ago and then they would know the definition of what falling down truly means. It seemed more colourful to us with much better road system though clogged with cars now. The strongest memory of the ten days we spent here in 1991 was of how hungry we were as there was very little food. We lived on tomatoes and cucumber. Food does not seem to be an issue now though we did not get the chance to go into a supermarket and check out the prices. Their plumbing has not improved – will not elaborate on that comment.

We could go into great detail of our day but too many things to mention so will post a lot of spectacular pictures instead with a few details. 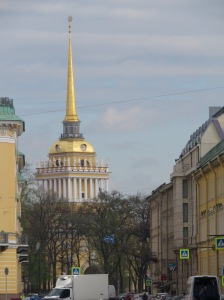 A commemoration gate of the Russian win over Napolean during the Napoleonic wars. 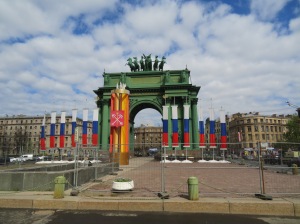 Supermarket on fire!!! We stopped here to get onto the underground when we pulled up outside this burning department store. In the ten minutes we were there we only heard one siren and that is when we headed underground. No one seemed particularly concerned about it. 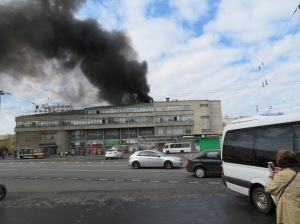 You have all heard how magnificent the underground in St Petersburg is and people are no exaggerating. There is no graffiti or rubbish anywhere. 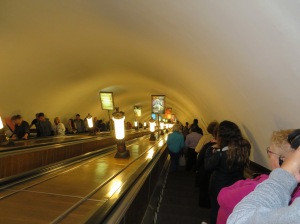 It was a deep station though not one of the deepest on the system. It blew us away that the escalators were wooden and also they moved extremely quickly so you needed to watch yourself carefully. Exactly like London, they used them during WWII as bomb shelters. 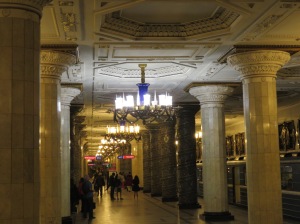 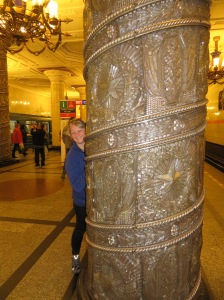 This is one of the pillars that you can just make out in the photo before this one. This is cut glass. They wanted to use crystal but were running out of money!!!!

We didn’t mention earlier but we had the best weather you could possibly have if you ever come to St P’s. Out of 365 days they have 60 days only of sun. It is a very humid climate and in winter gets down to -20c which when added to the moistness makes for a truly miserably climate to exist in. It also plays havoc on the buildings.

So, we were lucky we had such fine weather for our visit to the Peterhof museum and gardens. We remember well that when we last saw them they were totally kaput!!! A lot of money and time has gone into repairing them. Of course with the fine weather and with it being a Saturday the crowds were aplenty. 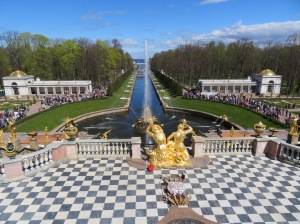 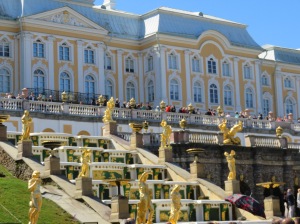 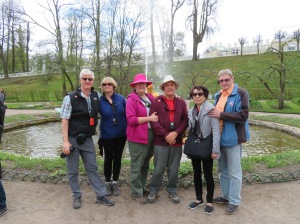 The six amigos in the gardens at Peterhof.

It was then off to St Catherine’s palace for a squid. These Tsars and Tsarinas knew how to splash the money around for the greater good of themselves. 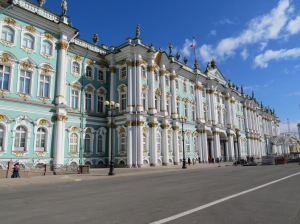 When the Nazi’s left St P’s in 1943 having laid siege to the city for 300 days, staving the occupants but never occupying the city centre, they raised everything they could in their retreat. The damage they caused to these monuments is impossible to describe and even hard to believe when we saw the before and after photos. There is still a lot of restoration to go but hopefully with the tourist dollar now flowing in there will be more funds for this work to carry on. That is of course if a particular lad does not want to add an annex to his Summer Palace in Sochi!!

This was the ballroom. When Catherine the Great died they found she had 16,000 dresses!!! Then again, she was not allowed to appear in court in the same dress twice. 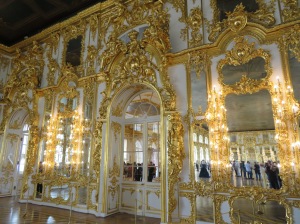 It was then off to St Peter and St Paul’s church where all the Tsars and Tsarinas were buried. They also included the remains of the last Tsar, Nicholas the second, his wife and 4 children five coffins who were shot dead and burned after the 1917 revolution which effectively ceased the reign of the Tsars. 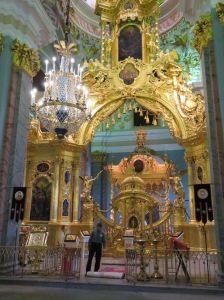 It was a very long day and have another one tomorrow so not a lot of fun tonight but dinner, Russian folklore show and to bed early!!!