What a great day. New country and just the best of weather to travel. We arrived into Tallinn at 8.00am. But before we start on today let us go back to yesterday evening.
Since we have been on board they have been promoting Faberge eggs++++. There is an interesting history behind them and the original Faberge was in St Petersburg. There is the current owner of Faberge on the boat and he has brought along some limited edition eggs for sale. We are well beyond acquiring dust collectors but also, it is not in the retirement budget but having said that you can still appreciate the beauty of them. Here are a few samples of what he has. Just to let you know, each egg has a surprise in them and below is a picture of the royal coach of Catherine the Tsarina of Peter the Great. The red on the coach is enamel. The colours are very intense. It takes on average nine months to make an egg this size. 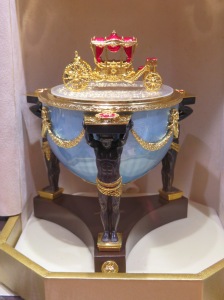 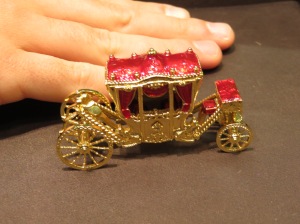 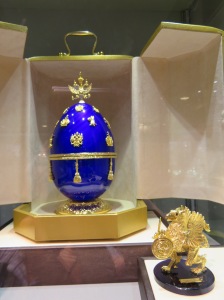 Had a dinner with the guys and headed back to our cabin via the rather extravagant central staircase
to be met by Fido.

Gorgeous sunset so we knew we might be in for some good weather in the morning. 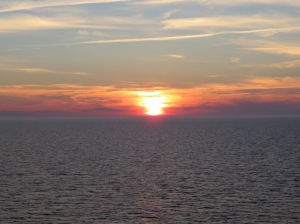 Up bright and early and popped out our heads to find the sea mist and the Viking Sea (Dwight and Leslie – was this the boat you guys cruised on??) off in the distance. Unfortunately, Di took it at a bit of an angle which makes it look like it is heading towards the bottom of the Baltic Sea, but we think you get the gist of the photo. 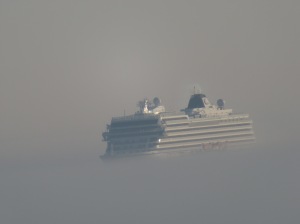 What can we tell you a little about Estonia. It proclaimed independence in 1918 but lost that at the beginning of the the Second World War having been occupied by Nazi Germany then tied to the USSR post the war. When the soviet era ended in 1991, they regained their independence again with the help of Boris Yeltsin.
It is interesting to note that Tallinn is a city that was not bombed during the wars so it is very original. The buildings show it and require a bit of upkeep but what was very refreshing to see was that the goods (souvenirs) for sale were locally and often hand made. The other point to note was that all the clothing on sale was for winter wearing. We thinks that summer here is even shorter than in Calgary.
We didn’t take a tour as the town is very walkable and now and then we eavesdropped on some of the guided tours to get a few facts. Having said that, Di did manage to get a small group to follow her.

The population of Estonia is 1.5 million of which 400,000 live in Tallinn. Citizens are at the minimum bilingual but they usually speak four to five languages. Those being Estonian, Russian, Finnish, German and English. How lucky are they.
It is very easy to walk around though a little hilly in a few spots and lots of ankle turning cobblestone streets.
You can see the very strong Russian Orthodox influence in the onion domes at the main church.

It was very lavish inside with copious gold gilding everywhere.

It is mostly a pedestrian city in the old part of the city. Here is a bit of interesting trivia for you – Skype was invented in Estonia which they are very proud of. Reckon we would be too.
Tour group managed to stick together for most of the morning. 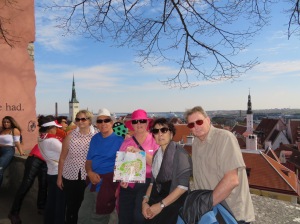 A few shots of around the old part of the city. Nearly every photo is spoilt by the honking great NCL tub in the background. 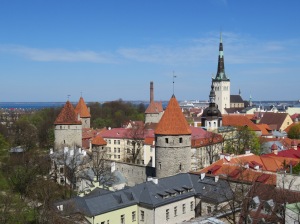 The city still has fair portion of the wall left with many of the turrets.

Di found a new friend but she was very shy and quiet. 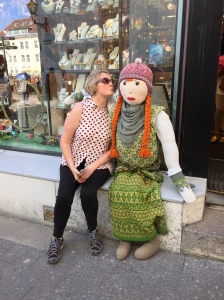 Their fashion sense it pretty backwards but practical in that they use a lot of boiled wool in their clothes.
A panno of the main square.