Since our last blog we have been going over mostly the same canal as we had on our way to Liverpool. We made it back to Wigan last night after a short cruisy day with a stop at a pub for a light lunch. We went passed this row of fishermen who were doing some kind of competition. As we headed off very slowly so as not to disturb them one of them yelled out for us to churn up the water as there was a lot of flotsam on the top of the water and he wanted it cleared out. We duly obliged and kept cruising but slowly. Then another one yelled at us that we were on the wrong side of the canal as that was where the deep water was with all the fish. In other words we should have been on the other side of the canal where they were all fishing but we thought they wouldn’t want this as it meant they would have to lift their rods out of the water to let us pass. Then the third fisherman grumbled profusely at us for even having the audacity to be on the canal. Can’t please these grumpy old men so in the future we will just do our own thing and if they whinge, blow a raspberry at them.

Last night at Wigan was extremely windy with the boat bouncing around and knocking the side of the concrete canal wall. We also awoke to rain – oh how bloody unusual!!

We were up early to get Nick off to the train station at Wigan as he was back to London. He will spend the night there and then fly to Lima as he is meeting up with a group to walk Michu Pichu.

We decided to chug off from Wigan after seeing Nick off but failed to notice that one of the mooring ropes had been blown off the top of the boat into the water. As soon as we moved forward it wound itself around the prop and was sheared off – oh buggar!! Now we have one rather short mooring rope which we will need to replace.

After sorting out that little drama we twinned up with a couple of guys in their boat to go through the three locks for the day. They were quite funny as they reminded us of the odd couple. One was busy yelling instructions from the top of the lock whilst the other was muttering under his breath about how he knew what to do. Entertaining for three locks but pleased we split after that.

We have both been having problems with a lot of stiffness lately and have been attempting lately to do a lot more walking and stretching to help us. Today we each walked about three miles each along the towpath whilst the other drove the boat. We had the pooches on and off the boat to give them some exercise also.

On our cruising today we went through the Wigan Flashes which is a very large area that had once been littered with underground coal mines that have since been closed. There has been a lot of subsidence since their closure which has filled up with water and created a magnificent area for water fowl. Sometimes there are good things that come from industry. 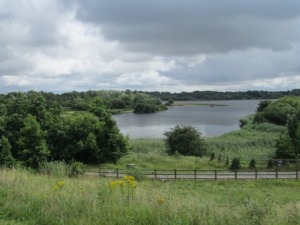 One of the many flashes that we passed.

The terrain was rather flat but there was a lot of fowl lift around. 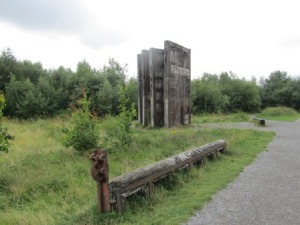 A sculpture along the towpath made out of old lock gates that use to be on the Liverpool to Leeds canal.

We pulled into Leigh just as the sun came out and will moor here tonight as we need to get the boat back in order and do washing.

God, washing is the bane of our existence on the boat. We bathed the pooches first as they had got disgusting underbellies after their walk in the rain and thought we could then wash their towels. We filled the two shopping trolleys up with the washing and then walked the kilometer to the laundrette. Eeeewww, it was not a nice laundrette at all. Bugger all of the dryers were working, the floor was putrid and the clientele there not the best. Back to the boat to clean her up a big and vacuum and then out to Tesco`s to fill up the larder. No matter where you go there are always the same boring chores to do but it always feels great once it is all done.

We will stay here tonight and then make the big push to the Castlefield Junction Basin which is pretty much in the center of Manchester. There is about 8 hours of cruising tomorrow and the opportunity to do some more walking.