We knew we had a day of 8 hours cruising so out of bed by 8.00am with a quick breakfast and off we went with the weather in our favour – the latter being a big win for us. In fact we have the next three days of great weather with highs of +23c and no rain – whoopee. Alas on Monday it is scheduled to rain which is the day that our friends P+P join us for a week – oh bugger!!!

The first hour of cruising to the town of Worsley was through some very heavily coal mined areas with once again many flashes and fantastic area for water fowl. We did manage to find one old head frame from one of the old coal pits. No doubt no longer in use. All the mines closed up around this area during the Maggie Thatcher era. They were very heavily unionised and it got to the stage where they were unprofitable. 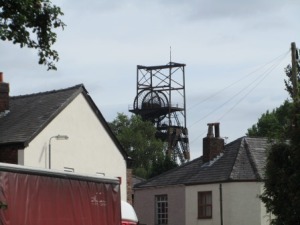 Passed the usual canal side pub but with it being 10.00am we felt it a little uncouth to drop in for a dram so plugged on. 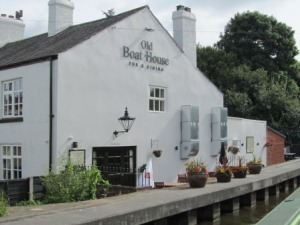 We got into our routine of each taking turns to walk the towpath to get in some exercise. Di bought herself a pedometer last night so her aim was to do 10,000 steps which is about 7 miles. She took Mapes and Toques with her but after about a mile Mapes was given a reprieve and put back on the boat whilst Toque revelled in the exercise.

Honestly, she was walking here, just having a short moment of R+R. 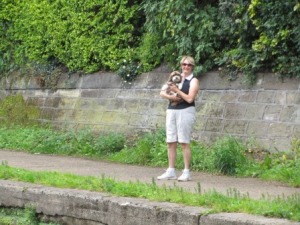 Our first bit of excitement was coming to Worsley which is where it all began for the Canals. The 3rd Duke of Bridgewater who owned numerous coal mines decided he wanted to be able to get his coal to Manchester quicker and cheaper so he created the first ever canal called the Bridgewater. In fact, he halved the price of coal by creating the canal. We stopped off at the spot today and did a wander around.

This is Worsley junction where one of the Duke’s underground mines was and where the canal started. 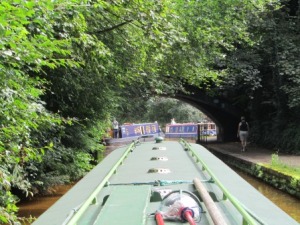 Although very picturesque it has a dark side to it. The entrance to the mine is just behind the bridge on the right in this photo. 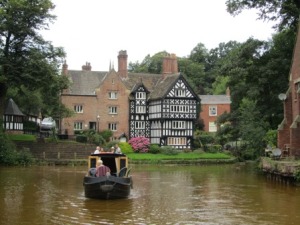 The working conditions of the coal miners was horrendous. They would work 14 hour days and that included children and women. They worked in extremely cramped conditions underground on their hands and knees or even on their backs with pick axes chopping out the coal for the Duke at wages that hardly met their living costs.

As mentioned below there is 46 miles of underground mines that have all now been filled up with water. We had a good look around the area but most of it is closed off to the public as it is very dangerous.

The Duke himself – looks a little like Churchill in profile.

We stopped to put on water and had a bite to eat before heading off down the cut.

I’m going to cheat now and put in Wiki’s explanation of the Barton Swing Aqueduct.

The Barton Swing Aqueduct is a moveable navigable aqueduct in Barton upon Irwell, Greater Manchester, England. It carries the Bridgewater Canal across the Manchester Ship Canal. The swinging action allows large vessels using the ship canal to pass underneath and smaller narrowboats to cross over the top. The aqueduct, the first and only swing aqueduct in the world,[1] is a Grade II* listed building,[2] and considered a major feat of Victorian civil engineering.[2][3] Designed by Sir Edward Leader Williams and built by Andrew Handyside and Company of Derby, the swing bridge opened in 1894 and remains in regular use.

There was a substantial aqueduct going over the roadway prior to going over the ship canal. It feels really cool sitting up on the boat waving to the motorists below going through their daily drudge. Going to go off the path here a little and mention that England is so overpopulated with motor vehicles that you can see that the future is not looking promising. They all complain about the constant traffic jams and how long it takes to go from A to B even with the large motorways. There is a big push at present to re-open a lot of the old train lines that were shut down in the 60’s to allow for more public transport. They really need to do something serious because what is happening now is just not sustainable. Everywhere we have been, through large cities to small villages there are always queues of traffic.

You can just see Fraser who walked onto the road bridge to take some shots back towards the aqueduct.

A good photo by Fras looking back at the aqueduct over the ship canal. 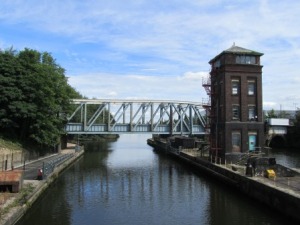 Sorry to be so mechanically nerdy but find this kind of thing very interesting and marvel at the technology of the time.

In this photo you can see both sides of the ship canal and how the swing bridge pivots on the central island.

Nb Lucy making her way across the aqueduct. 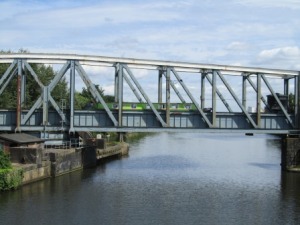 You get quite different perspectives from being on the boat and from also being off the boat. Here are some pictures taken from Di’s vantage point on nb Lucy. 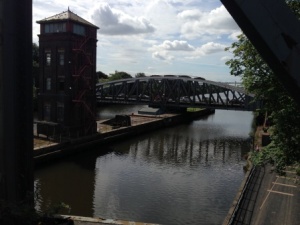 After that bit of excitement it was off to Manchester. From here it started to get rather industrial as one could imagine. Also rather grotty.

We passed the Kellogg’s factory that pumps out 1 million packets of cereal per day but were not quite quick enough to capture a picture of the chook. We could certainly smell the cooking of the coco pops.

Passed the holy shrine to the beautiful game….

….where young men are overpaid.

We passed by some pretty structures but then………..

You get hit between the eyes with a lot of this.

At one stage we had the Manchester Ship Canal on our left, then the Bridgewater Canal with an elevated tramway line also on our left with a train line on our right with a major motorway next to that. All different modes of transport from different eras.

Coming into Manchester we came under some lovely ornate bridges from day’s gone bye.

After a lengthy cruising day we pulled into Castlefield Junction. We were quite fortunate to secure a mooring in a leafy part of the quay with a bit of grass for the dogs.

We are not totally sure yet but we might move off in a day or so and go up what they call the Rochdale 9 which is a flight of locks that take you right into the Piccadilly Basin. We have been repeatedly told that these are poorly maintained locks and take a lot of hard work plus the passage is rather seedy. We will have a walk tomorrow and see if it is worth going up there later on.

Once we moored up we took the pooches off for a walk around the quay to get the lay of the land and see what is available. There are certainly a lot of eateries so we will not be lacking in choice. We are well located for the Museums and not too far from the old Granada studios where they use to film Coronation Street. We will do a little bit of homework but don’t think the tours around the studios are still going as the site has been sold for redevelopment.