There really isn’t a great deal to write about on our tour hour cruise from Napton on the Hill to Braunston except to say that we were utterly stunned to discover we had no Wi-Fi connection. Braunston is one of the biggest canal hubs which is why we were surprised.

Our cruise was along some winding canal through the Warwickshire countryside in very pleasant weather. We are now getting to the end of the summer season and the farmers are out their collecting their straw.

Our arrival was at 1.00pm so we went for a bit of a wander down to the marina which is very much a busy working marina. There were three dry docks and everyone of them was busy with boats in them. They also build canal boats at this location. 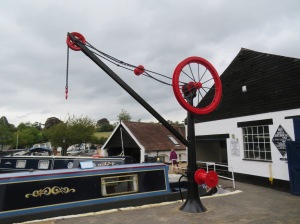 There were some old lifting gear from the old days that had been carefully preserved. It was here in 1970 that the last commercial trip on the canals ended. It must have been a very sad day for the boatmen who when reading the history had spent their entire working lives on the canals.

It is a pretty area to walk along the towpath and very, very busy. On our trip along the last bit of canal today, we were in a queue of six boats plus continuously passing oncoming traffic.

A light lunch was had at The Boatman Pub whilst out sitting the little showers we were having. The rest of the day was spent doing a few maintenance items on the boat and then enjoying the remainder of the day catching up on blog and horror of horrors, watching some TV.