We are going to start to sound like a broken record now that we have backtracked through our previous steps!

We teamed up with another narrowboat this morning and set off up the 22 locks of the Caen Hill Flight at 10.00am. We were the first cabs off the rank and all the locks were set in our favour. We did the first 16 locks in 2 ¼ hours and the other 6 locks which are spread out more in 1 ½ hours. We also achieved all this in no rain which was just wonderful. The other boater we went up with was on a hire boat, so once again we convinced them to enter the locks together which they obligingly did and were very chuffed with themselves.

At the top of the last lock sits the town of Devizes. After a spot of lunch we wandered off the canal into the town which was a very pleasing place. 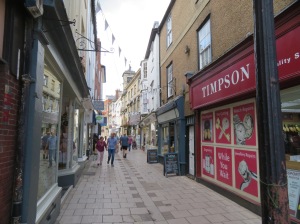 The center of the town has a vibrant Main Street and lots of little alleyways which kept us amused for a good hour. 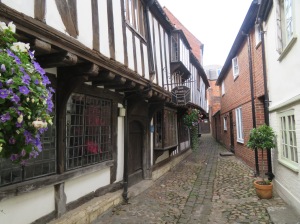 This is one of the alleyways with this gem of a place which is a haters shop. It dates to 1520 and like nearly 500 other buildings in the town are listed.

This was the Town Hall which is still fully functional.

Quintessential post box and this one was in very good condition having recently being repainted.

From the 16th century Devizes became known for its textiles, and by the early 18th century it held the largest corn market in the West Country, constructing the Corn Exchange in 1857. In the 18th century, brewing, curing of tobacco, and snuff-making were established.

The town attracts some tourism due to its proximity to Avebury, Stonehenge and Salisbury. Local attractions include Wiltshire Museum, Caen Hill Locks, the Kennet and Avon Canal, seasonal crop circles, and the White Horse. The Wadworth Brewery, with its shire horses, operates a visitor centre.

The town is the starting point of the annual Devizes to Westminster International Canoe Marathon. 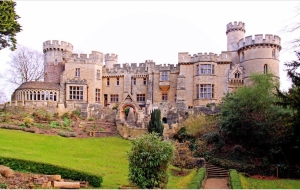 In 1842 the Leach family built a Gothic Revival fantasy castle in the town of Devizes. This was designed by Henry Goodridge of Bath and incorporated the remains of a 17th-century windmill. The house was extended in the 1860s, with funds gained from a successful venture in building a lunatic asylum.

The main feature is a large circular tower, decorated with fanciful machicolations and parapets. The castle is reached through an impressive entrance in the form of a Norman gatehouse. 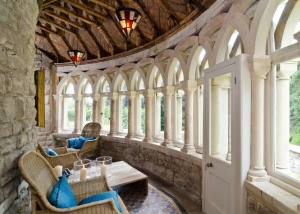 The castle is in private hands which meant we were unable to go and tour around. It is currently up for sale for a cool £3.25million.

Following our wandering and the fact that the rain was coming back more consistently we headed back to the boat for an early night.

It has been brought to our attention that the blog has been suffering from lack of video recently, so have made up a couple that don’t say much. Hope you all enjoy🤪🤪

Input and Output of a Narrowboat.