Today consisted of getting to our end point without being drenched. The forecast was to be dry until midday and then the precipitation would begin. We got on the way at 9.30am with the knowledge that we had fourteen locks to do and five swing bridges. 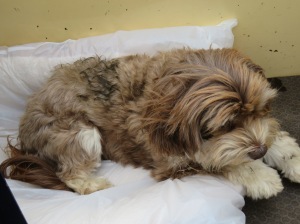 Di likes to get out and do the swing bridges as they are slightly easier to do and give Fraser a break. She also uses this as an opportunity to take Toque for her daily walk. As she was walking back to the boat after finishing the bridges she was pretty sure she had stood in some dog Pooh yet she couldn’t see any on her shoes. Then Toque caught up and an answer was starting to appear. It was not dog Pooh though. In fact we couldn’t work out what it was. We think it was plant matter as it was very sticky and had a peculiar smell.

So in the middle of doing all these locks we had to bath her which took two washes and two rinses to get rid of the smell. Just as that task finishes the rain had the audacity to put in an appearance along with gusty winds. By now we were just plodding along with it all.

Our plan was to stop in at The Bridge Inn pub which we had seen on our way to Bristol and had promised ourselves we would visit on the way back. Due to it being Sunday we felt a very English tradition of a Sunday roast would be well earned. Alas though, with the heavy rain we felt that if we stopped we would not get going again.

We achieved our destination of the bottom of the Caen Hill flight at 3.00pm. We will tackle this tomorrow in fine weather but meantime we scurried underneath to get some respite from the rain. 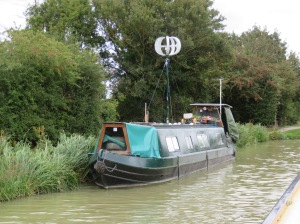 Not a lot to report from today but we do notice a lot of boats are going into green energy. If they haven’t got these wind turbines on them they will have solar panels and in some cases both. We have also seen the odd electric boats but not quite sure how they recharge.