Up at the ungodly hour of 6.30am as wanted to get to Stone and back to Leicester by 12 midday as then it would only be a one day car hire. Such fun driving up the M6 with the morning traffic where the gazetted speed limit is 70mph but to keep up you have to go 80mph!!

Driving through the Staffordshire countryside was just gorgeous once you got off the A road and then onto the B road as you got closer to Stone. Our first port of call was the Shire Vets where we had ordered Toques special hypoallergenic food. We had done the same thing back in 2016. Toque was still very much out of sorts this morning being very jumpy and falling asleep heavily. We think it is the jet lag as we certainly didn’t feel that good. 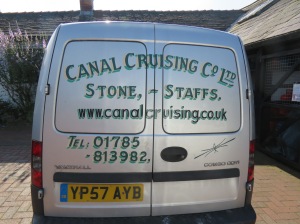 Next stop was the Canal Cruising Company where we had hired NB Lucy from back in 2016 to pick up our stored cache. It was funny being reunited with the stuff. As it was in the attic of one of their sheds it was covered in black grimy dust which we would say comes from when they sand down the hulls of the boat. We caught up with Karen from the company who got us our stuff and had the chance to have a chat with her. Her husbands parents had started up the hire company 75 years ago and is therefore the oldest hire boat company on the canals.

The very distinctive Kermit green fleet is the oldest on the canals but they still turn them out well. We went to see if Lucy was there but she was out on a long term hire. Karen mentioned that our 18 week hire in 2016 had since been surpassed by three weeks and that they were finding people were wanting longer term hires. Looks like we may have started a trend.

Of their entire fleet they only had three boats not out on hire. Karen mentioned they were doing a lot better this year as last year with the large breach on the Middlewich Branch, their hire numbers went down. Many people who hire from them do what is called the Four Counties Ring of which the Middlewich Branch forms part of the link. With that area out for nearly 18 months, you can see what this would mean business wise for them. 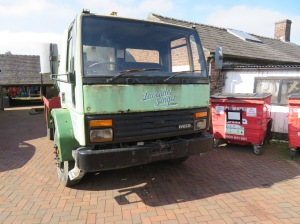 We got a real giggle when we saw Lavender Ginger again. She is their pump out truck!! Hmm, maybe an alternative name might be more suitable like “Loo Ginger”.

It took us 1hr 40 minutes to get the Stone but on the way back with a lot less traffic it took us just over an hour. Hire car was dropped off and we walked back through the central part of Leicester City which has now more recently reinvented because of two very current stories. 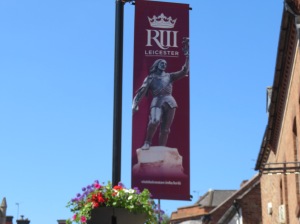 The first is the discovery of King Richard III’s remains which were found under a multi storied car park that they had demolished. 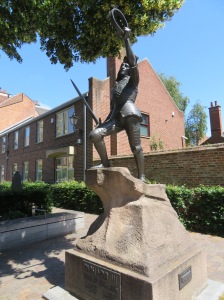 The second event is a lot more modern. Leicester City football teams odds of up to 5,000/1 were offered on Leicester to win the Premier League at the start of the season- of which they won in 2016.

Now that you have been educated on Leicesters recent history it is now time to get back to the commencement of our cruising day. It was such a reassuring and comforting sound to hear the sound of the motor turn over and set us on our way. Even the sound of the water pump kicking in when filling up the kettle or taking a shower were all familiar sounds that go along with living on a canal boat.

We cruised from 1.00pm until 6.00pm heading south from Leicester on the River Soar and then onto the Grand Union Canal. There were twelve locks to negotiate of which it didn’t take us long to get back into the swing of it.  We did a grand total of five miles and moored up for the night at Kilby Bridge.

It was a quick evening meal at The Navigations Pub situated right next to the canal and then a crawl back to the boat and into bed which was very sorely desired!!