Well we made it across the pond in one piece. The flight was great as it was in a new 787 Dreamliner which was very quiet and smooth and even better, we had a free seat between us and arrived 45 minutes early. Must have had a beaut tail wind.

Customs was all electronic with not having to speak to anyone or see anyone to speak to so we didn’t declare that we had brought in a third of a bag of dog food. Picked up our buzz box of a hire car with minimal hassle and made our way around to the other side of Heathrow to pick up Toque.

This is when good slipped into bad. We had thoroughly done all our homework into making sure her paperwork was correct, which it was but then we are told that we have to wait 6-8 hours so they can process her. We landed at 9.15am and she was off the plane and into the Animal Reception Centre by 9.35am which is very good. Well, what can you do?!

We decided to drive to a small town called Staines which we knew well from our last foray into bringing dogs into the UK. We decided to kill a bit of time and were both hungry so went for a good old staple that a lot of travellers resort to – yeap, MacDonalds. At least you know you are going to be disappointed. 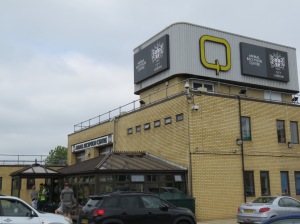 Back to the Animal Reception Centre, which by the way is known as ARC – get it?! They come and tell us she is ready to go but is waiting for customs but should be half an hour. One hour later and still nothing even after we called customs. It appears the right hand does not know what the left hand is doing. Finally they come out and we have to pay the VAT on Toques value. We decided that she was a 7.5 year old spayed Havanese with a gammy back leg so put the lowest value on her that you were allowed to – £100. Just don’t anyone tell Toque!

Finally we got her at 3.30pm and she was very excited to see us. The waiting room was busy and each time a dog came out everyone ewwwed and was very happy for the owner and dog to be reunited. We have to say that Toque got the most ewwwes as she was the cutest. They informed us that she had been very vocal nearly all day whilst in her run. In other words, she howled the place down.

Due to her late pick up all our plans went astray. We originally had planned to drive up to Stone to pick up our stuff we had had in storage with the Canal Cruising Company from back in 2016 and also visit the vet there who we had ordered her extra food from. It was too late by the time we left Heathrow so we drove straight to Leicester. We decided we would get up early and do the trip to Stone tomorrow early in the morning before we return the car.

Finding Marlene and Wolfgang moored in Leicester was not a problem and it was such a pleasure and delight to be reunited with them. The boat was decorated with a Welcome Home sign which alas we didn’t get to take a photo of. By now we were feeling very, very tired and a little non compus mentus as was Toque. The guys had prepared a lovely dinner for us with a much needed cuppa tea and only a very short evening before we collapsed into bed. We think our heads hitting the table top gave the guys a clue that we should be tucked up.

Our sleep was a little broken as Toque had jet lag and once she got up for the bathroom and then at 2.00am it was up to insist we played with her and her ball – ugh!!!!