Alas, it wasn’t three days of swimming in a row. The start this morning was in the pool by 7.00am and for us it just wasn’t going to happen. We crawled out at 8.30am and packed up the final necessities in the van and had some breakfast. We farewelled Dex who was off flying down the North Island to the west coast looking for Tuna schools. Paula dropped him off as we had the van that he would normally use.

We were on the road at 10.45am after getting a little bit of food shopping. We rendezvoused with Wilma in Anthernree where she has an offer in on a house there and went to check it out.

It was then to Waihi Beach for a bite to eat out of the vans and then back on the road to Karangahake Gorge where we were planning to hire bikes and go for a ride. You hire the bikes at the old train station that is now a classy café with afternoon teas. There was a lot of underground gold mining around this area. Nowadays it is a tourist mecca for trampers and cyclists.

Unfortunately, we were too late to hire bikes so on our way back we will do it. Meantime, there was an opportunity for a walk along the old rail line instead which was accomplished in an hour.

Wilma at the entrance to one of the old mine shafts. They ceased mining for the gold in 1936.

Originally all freight and passengers trains use to go through the gorge until the Kaimai Tunnel was put through. Since it was opened in 1978, it has held the title of longest tunnel, at 8.879 kilometres, in New Zealand, assuming this distinction from the previous title holder, the Rimutaka Tunnel.It is part of the Kaimai Deviation, which was constructed to bypass the old route of the East Coast Main Trunk Railway through the Karangahake Gorge (part of which has been preserved as the Goldfields Railway). During construction, a cave-in, caused by a high ground water level, resulted in the loss of four lives. The rescue operation was able to save eight other workers who were trapped with those that perished. 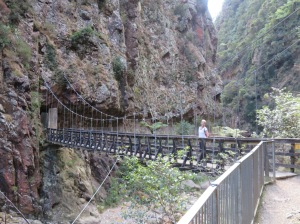 After the walk it was back in the cars as we headed towards Hot Water Beach which we will go into detail in tomorrow’s blog post.

On the way we stopped into the town of Paeroa. Lemon & Paeroa, also known as L&P, is a sweet soft drink manufactured in New Zealand. Created in 1907, it was traditionally made by combining lemon juice with carbonated mineral water from the town of Paeroa, but is now owned and manufactured by multi-national Coca-Cola – how unusual!!

We pulled into Hot Water Beach about 5.30pm and settled in for the night. It took all of us a little time to sort ourselves out as our van was unfamiliar to us and Wilma had just had her van fitted out. Lovely cool evening with a clear sky to view all the stars.