Packed up and out the door by 7.00am and down to the Wellington Train Station to catch the Northern Explorer train. This train service runs from Wellington to Auckland and vice versa about three times a week. We reckon it is all the same rolling stock and what they do is just turn it around at the end of each evening and send it back down in the morning with one day of rest a week. 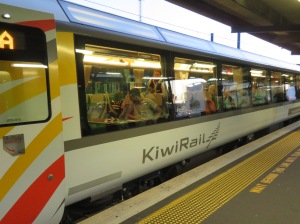 Very pleasantly surprised to see the carriages are all very new and well turned out. We learnt later in the day that it was indeed brand new carriages. Certainly cannot complain about the comfort level. It was unfortunate that the audio system wasn’t working as was looking forward to the commentary. Neither of us had ever done this trip before so were very much looking forward to it. 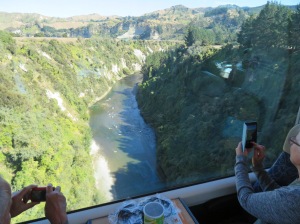 The weather turned itself on for us again with blue skies as we left Wellington. We cruised through magnificent green steep hills and then followed the western coast line along the Tasman Ocean. At some stages, the rail track was right on the edge of the water line. 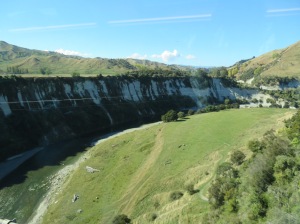 There was a viewing car at the back of the train but it was locked off as it appeared some dumb tourists decided to hang their heads out the side to get a selfie and either met the edge of a tunnel or a train coming the other way. There is just no way to help some people – they are doomed by their stupidity. 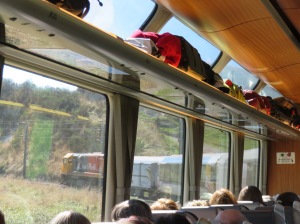 The carriages were semi dome carriages which gave you you some extra viewing opportunities and gave in heaps of extra light. 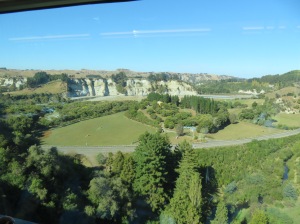 The best photos would of been of the train going over these amazing viaducts but a bit of a no goer considering we were in the train. 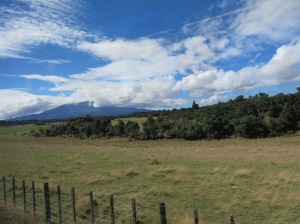 We went west of Mt Ruepheu which is the georgraphical centre of the North Island and is still very much an active volcano. She has blown off in recent years and one particular occasion it was the ski seasons and there had to be a mass evacuation. It has its own microclimate as you can see from the photo above and though hard to see it has snow on the top even at the end of summer. 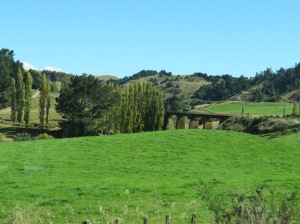 We had heard that New Zealand had been in a drought but and in some small pockets you could see browned but nothing like Australia. Otherwise, the land was lusciously green. As to the reputation of the country with more sheep per head of population that any other country in the world, it didn’t appear to live up to it quite as much as it use to. We saw heaps more dairy cattle and a lot of deer being farmed. Di always reckons that New Zealand has the best chocolate, cheese and ice cream in the world and she is sticking to her beliefs.

We were very surprised to find that the train ran exactly to the timetable and we arrived in Hamilton at 4.20pm to be met by Di’s old nursing buddy Wilma. Their friendship goes back forty years and though they don’t catch up too often, it is like putting on an old sock again. It was Wilma’s suggestion back in 1981 to go to Australia which started the whole wanderlust thing off!!! Wilma returned to New Zealand after a year as she wasn’t as much of a traveller as she thought and her mum was in poor health. We all know that Di just kept going.

It was a very late night, early morning as Di and Wilma had a few years to catch up on.