Up bright and early as we had a booking for a tour out at Weta Studios. Our original plan was do a tour of the Parliamentary buildings but due to the Christchurch massacre, the country went into two weeks of mourning and the tours were ceased. So hence, our change in plans. It was a convoluted trip out to the studios as it involved two buses and a walk.

We arrived in a very humble suburb where the studios were. Weta studios does design and effects work on award-winning film projects, including The Lord of the Rings Trilogy, King Kong, The Chronicles of Narnia, Avatar, District 9, The Adventures of Tintin, Elysium and The Hobbit Trilogy.

There were a number of different tours you could do but we were just interested in the miniatures tour which is centred around the Thunderbirds. Neither of us has seen Lord of the Rings or the Hobbit so we were not into those tours which are the main draw card.

We remember the stringed puppet version but apparently the characters are now animated. The Thunderbirds were a big hit back in the 1960’s but apparently there is a resurgence with the series that has been released on Amazon.

We were very limited as to what photos we could take and unfortunately we couldn’t get the one with Thunderbird 1 coming out through the pool. They have also changed the kidney shaped pool to a rectangular one and the reason being is one of the Tracy boys is now an Olympic swimmer. They have certainly modernized the programme a lot and it is overly politically correct. 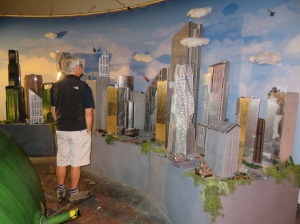 Weta Workshop now has a creative portfolio that spans a large number of other blockbuster movies and gaming properties including The Amazing Spider-Man 2, Godzilla and DOTA 2. We know none of these!!

On our walk back to the bus we noticed a few of these blue signs on the road. You might not be able to read them from this picture but they say “Tsunami Safe Zone” – obviously they take this stuff seriously. The whole country is now set up with Tsunami evacuation zones which is new since Di grew up here in New Zealand.

We made it back into the city and still went for a walk to the Parliament Building and the Beehive. The older building is made of a grey marble from New Zealand – never knew New Zealand had marble. Another piece of trivia – Wellington is the most southerly capital city in the world.

Lunch was back at the apartment and then it was back out to do a ferry ride around the harbour. It is quite an extensive harbour and once away from the shelter of the hills you realize that you are truly are in the roaring 40’s!!

We got off at a beautiful beach called Days Bay for a couple of hours and wandered around.

There was a tribe of boys bombing off the wharf having an absolute ball. Those were the days!

There may well not be a blog tomorrow as we will be catching a train so doubt Wi-Fi will be available.