We had a few tasks to do today and they involved another few sad goodbyes. The first was to go out to Aunty Jen’s nursing home and help Barb clean up her porch area and stock up supplies for the cat as Barb is off to Japan for twelve days in mid April. Had a lovely cuppa with Jen and said our final goodbyes. 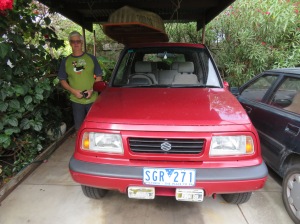 Then it was back into Suzy Suzuki and we took her out to the suburb of Burwood where she will remain until a decision is made as to where and whom she will go to. She was certainly a huge help to us and saved us a fortune on hiring a car. Her first 1000 k’s were a bit rough as she hadn’t been driven for eighteen months whilst she was stored in Adelaide, but after that she just purred along at a very comfortable 90kph.

Her kilometres when we picked her up from Adelaide in early December was 171213, so we have done 9,300k in her in four months. That is certainly a record for us. Now for a bit of trivia. Australia’s Highway 1 is a network of highways that circumnavigate the country, joining all mainland state capitals. At a total length of approximately 14,500 km (9,000 mi) it is the longest national highway in the world, surpassing the Trans-Siberian Highway (over 11,000 km or 6,800 mi) and the Trans-Canada Highway (8,030 km or 4,990 mi). So effectively, we drove 9/14ths of Highway 1.

We wound up the rest of the day visiting a tax accountant, whoopeee-NOT!!! Otherwise very quiet spending the afternoon meeting one of Barb’s neighbours and having a cuppa.