After a late night it  would have been nice for the retirees to have a sleep in but we had organised to take the Evans/Nenert family out for breakfast to a great café called the Train Station. After filling our boots with smashed avo, it was suggested that maybe the cars needed a wash and vacuum.

Considering we had two likely lads in Dale and Will, it was decided that with some coaxing, threats and a promise of a game of cards, that they could help out. What turned into a simple task became a problem as the vacuum cleaner broke. Then the washing machine went on the blink and prior to that the dish washer has been out of action for six weeks, so it was a matter of teaching the boys how to work around these inconveniences. You could just imagine the eye rolling coming from them and also the total inability how to do things the old way. 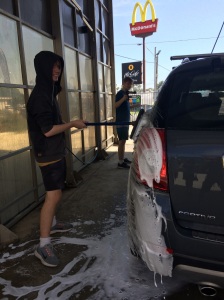 What originally started as a chore turned into a lot of fun. Neither of the boys had done a manual car wash before so it was lesson 101 how to use the tools. 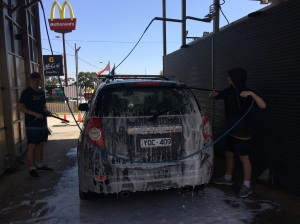 Surprisingly, no one got wet in the process. As a thank you, we stopped it off with a McDonalds ice cream which as you can see from the photo was not very far away.

As promised, on our return to the house we had a game of cards playing “golf” which everyone has taken to. It has created huge amounts of laughs and “oh no’s”, but been really bonding. It also gives the boys a break from study as Dale is into his third year of Civil Engineering whilst Will is doing IT with game technology. For all the gruffs and unenthusiastic groans, they have spent a lot of fun time with us and we hope have realized all old people are not the same.

We have been very pleasantly surprised on this trip that all the youngsters we have met from pre-teens to mid twenties have been friendly, engaging and delightful. We realize they have probably been on their best behaviour as their parents have more likely than not threatened them with no screen time but we feel they are genuinely great kids on the whole. We know we give off that air of being a little odd, youthful in our outlook and activities and non-encumbered which seems to make us approachable to them. Sometimes they share things with us which they don’t with their mum and dad and we have NO idea how to handle it. We are still stuck back in our teenage years way of thinking as we haven’t had kids to teach us how to move on. Anyway, we hope our words of guidance go someway to relieving their anxiety or else it confirms to them that we really are dinosaurs!!

Our evening was to go into the city and have dinner at Trevor’s club with him and his mum as he was off to Canberra in the morning and this would have been our opportunity to say farewell.