Today started for us with an appointment with a tax guy who we needed to get some info off regarding our status as Canadian Citizens. He spent nearly three hours telling us how he could manage our wealth at an exhorbitant cost but not tell us what we specifically came in for. We walked out three hours later and thought, well we ain’t going to get that wasted three hours of our life back. Best feeling was that he also wasted three hours of his time.

The main activity for the day was to go to the footy. Footy in Melbourne means AFL – Australian Football League – aka Aerial Ping Pong. 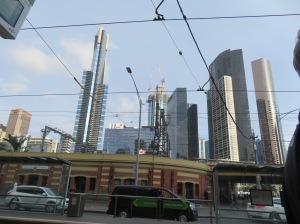 The game didn’t start until 7.30pm but we left two hours early as a huge crowd was expected. We are very pleased we did as trams were chokkers (full to non Australian readers) and it was slow with a 95 year old which is what you would expect as Frasers dad came with us. 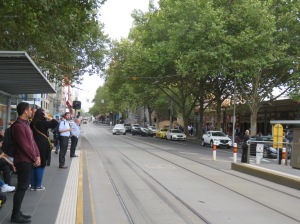 This is a very important game as it is the first one of the season and it is always played between Richmond and Carlton. 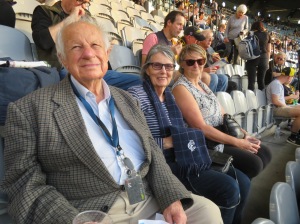 Frasers father Trevor, is a Richmond supporter whilst the rest of the family are Carlton supporters. Di, supports the All Blacks!!! As you can gather, she isn’t much of a footy follower. In Melbourne you are known by your club allegiances and not your name. They are absolutely fanatical here. But, they are not like hooligan soccer fans with their chants or violence, or the ice hockey teams who riot in city centres in Canada. It is all in good spirit. 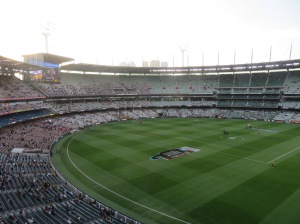 Both teams have huge fan bases and are very old Melbourne clubs so the “G” tonight was going to pretty much full to the brim. 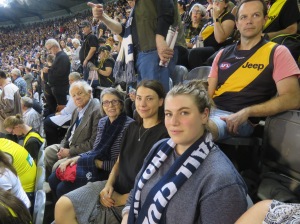 We had Frasers neices’ Aya and Imi join us for the evening and of course they are Carlton supporters as you can see from Aya’s scarf. 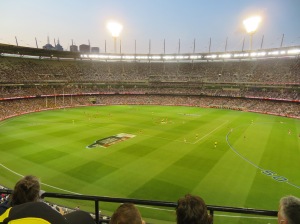 Total crowd attendance was 85,016 which was down a bit on the prediction of 89,000. We were told they are going to put a further extension on a stand which will bring the capacity of the G from 101,000 to an anticipated 120,000. The atmosphere in the ground tonight was brilliant, so add in another 35,000 and it would be spine tingling. Won’t go into detail over the game except the second and third quarters had the crowd well involved and some great play. Alas though, Carlton did lose to Richmond by 30 points. 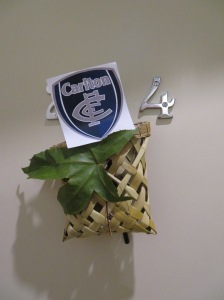 We didn’t get back to Henty House to nearly midnight by which time we turned around and drove out to Belinda’s. Barb always does lovely little touches to the front door of her apartment which are very thoughtful and appreciated. Today it was a Maple Leaf in a basket with a Carlton Banner. Think it will be a sad face when we leave on Wednesday though. Well, let us hope it is sad and not happy!!!