Struggling with the humidity created by the cyclone off the coast of Queensland which does not look like it will make landfall now which is a good thing.

Nick, Carlo and Fraser headed off to Southbank at the ungodly hour of 6.15am on a Saturday morning to join in the Brisbane 5k Park run which Fraser had competed in twice before. About 600 people turned out for this one. 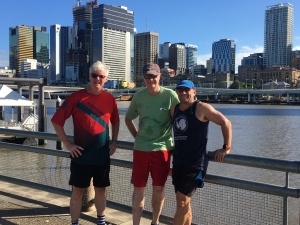 All three finished in acceptable times for old farts but Carlo did outshine the other two a bit. Carlo is a freaky marathon man who has done marathons on seven continents including Antarctica.

Di and Maree joined the boys down at the West End weekend markets to do some fruit and vegetables shopping a little later and congratulate them all.

The remainder of the day was a bit of a wipe out as all three of us then returned to the apartment and crashed out for an afternoon kip which for some turned into an early evening kip which was a really bad move.

We finished the evening with a great movie called What we did on our Holiday with David Tennant and Billy Connolly which had all of us in stitches. It is a bit of an older movie but worth the watch.