Australia Day is the official national day of Australia. Celebrated annually on 26 January, it marks the anniversary of the 1788 arrival of the First Fleet of British ships at Port Jackson, New South Wales, and the raising of the Flag of Great Britain at Sydney Cove by Governor Arthur Phillip. The indigenous people refer to it as Invasion Day and there but opens another can of worms. We can add more to that as we celebrated at my neices home where amongst the eight adults that were there, only three were Aussies whilst the rest were Kiwi’s – ogh, ogh!!!

Not too sure if many of you will be interested in reading this blog posting today as it is all about family. We drove down the Mornington Peninsula to Sandhurst where Di’s neice Anna lives with her husband Richard and their two children Taylor and Hunter. Hunter turned seven on the 24th whilst Fras turned 58 on the 25th so we had a combined birthday party.

Present at the party was also one of Di’s other neices Kate and her partner Bob. They live on the other side of Philip Bay so had quite the trek to come and join us. Kate lived in Vancouver back in 2010 for a year and some of our Canadian friends got to meet her. She is now settled in Melbourne enjoying a very hectic life style. 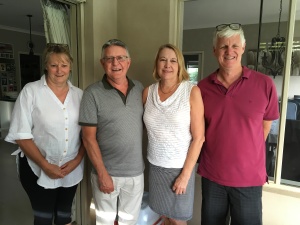 The third relative at the party was Di’s cousin Terry and his wife Sandra. Terry is Di’s mothers brothers son – all sounds rather confusing doesn’t it. Di had not met him for over 50 years and with typical family tensions we were never encouraged to do so. It was so lovely to meet him and sad that it has been such a long time in coming. His wife Sandra is as dog infatuated as us so out came the fur baby photos. We did get to see photos of their son and daughter as well.

It was a very chatty afternoon with everyone blending in very well. It turns out that Anna and Terry only live half an hour from one another so there will be more time spent together and they will get to know their first cousin once removed – that stuff really does your head in!!!

We got back to Belinda’s in time to watch the woman’s final tennis which Naomi Osaka won. This is the young girl who won the US Open against Serena Williams which involved a lot of controversy with the umpire. So all in all a good day.