Jen dropped us back down to the Busselton Jetty for a train ride out to the end of the pier. 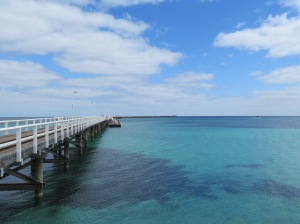 It reminded us a lot of the Brighton Pier that we went to last year in the UK except there was no Punch and Judy show and a hell of a lot less tacky – excluding the train ride.

The water at the end of the pier is only about 8 meters deep so once ships started getting bigger it no longer became a functioning Jetty. 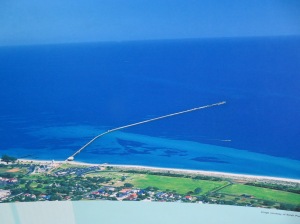 In 2003 they put in a natural underwater observatory which draws the crowds including us.

Not a great deal to see but the colours were some of the best we have seen. They have had visits by dolphins, seals and a whale once.

The whales are tracking from Antarctica to the warmer waters up near Broome and come along the west coast of Western Australia.

We opted to walk back the 1.8k instead of going by the train which not sure if it was a good idea as it was a howling gale. We are at the latitude where the roaring 40’s occur. The Roaring Forties are strong westerly winds found in the Southern Hemisphere, generally between the latitudes of 40 and 50 degrees. The strong west-to-east air currents are caused by the combination of air being displaced from the Equator towards the South Pole, the Earth’s rotation, and the scarcity of landmasses to serve as windbreaks.

The Roaring Forties were a major aid to ships sailing the Brouwer Route from Europe to the East Indies or Australasia during the Age of Sail, and in modern usage are favoured by yachtsmen on round-the-world voyages and competitions. The boundaries of the Roaring Forties are not consistent, and shift north or south depending on the season. Similar but stronger conditions occurring in more southerly latitudes are referred to as the Furious Fifties and the Shrieking or Screaming Sixties. Gotta love the names.

Joined up with Al and Jen for a coffee and then went to the old court house for a tour and low and behold, guess who Di found being processed.

There were nine very heavily reinforced cells there of which eight were for the white fellas and one for all the aboriginals. They whities got their own cells whilst the Aboriginals were shoved into one cell and they were also chained in the cell wall. The whities were not chained. There was the most appalling of treatment vetted out to the Aboriginals and sadly it still carries on but not so blatantly obvious.

The present name of Busselton derives from the Bussell family. It was first officially used in June 1835. The Bussells, who were not consulted about the name, preferred the name Capel after a relative in England, Capel Carter, but the name Busselton was retained. A town named Capel was later established to the north of Busselton.

It was back to clean up and pack up the house to head home to Perth. It is a two hour journey and on the way it was a game for us to see if we could pronounce some of the really weird names along the way.