This was the scene from our bedroom window, the day before we left. Very pretty although perhaps indicative of a long winter to come. Anyhow we won’t have to worry about it, this year.

The beginning of a very long 14,000 kilometre trip involving two flights. First flight is Calgary to Los Angeles (the most unappealing airport in the world) with a six hour lay over and then LA to Melbourne. This second flight is 15.50 hours leaving at 10.40pm on Tuesday evening and arriving into Melbourne at 08.30am on Thursday. We lose a day but we gain it on our return to Canada.

Have you ever noticed that they always put world maps starting with the international date line on the right. The way around that, is to ask for a universal world map as above or perhaps maps sold in Australia that look like this.

Before we left the house at 11.30am, the four of us took Toque to the off leash dog park to give her a good run and our last walk with her for seven months.

Simon and Joannie and Toque all took us to the airport. 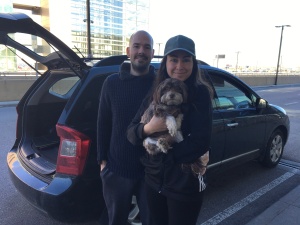 It was very difficult saying goodbye to her as seven months is a long time in her life and we will miss her terribly. She has great carers in Simon and Joannie and we have no qualms of leaving her with them. Our biggest concern is they might dognap her just before we get home.

Some of you may be aware that Canada legalizes pot the day after we leave, so not too sure what kind of a country we will be returning to. It all seems to have been rushed through a bit too quickly and everyone is on the bandwagon of making a mint out of it. Does this sound a little like the dot.com bubble? It has its purposes under a medically prescribed situation but as to the free for all, we both have our concerns especially for the young developing brain.

We had magnificent views of the Canadian Rockies as we headed south.

On arrival into LAX we had to find our way without any directions to the Tom Bradley terminal where Qantas leaves from. We got a bit of a Cook’s tour around the bum end of a few rather large planes.

We experienced our first flight on an A380 – big bugger! We were in row 71 and that was only two thirds down the plane plus there was all the lot upstairs. The A380 felt really squashed and both of us were pretty uncomfortable. The flight to Melbourne was as expected – looonng!!! Once you cease earning an income, you don’t get to turn left when you board the plane unless you walk on backwards (think this through). Not that we use to a lot but now and then we use to get upgraded. So it was down into cattle class where you are scorned by the space waiters.

Arriving into Melbourne at the same time as us, is Prince Harry and Megan Markle. Didn’t catch them at the airport so thought we would see them on the SkyBus going into the city, but alas, they must have taken the less salubrious local bus.

Before you ask, yes we are jet lagged but not as bad when you go East to West. Going the other way is murder. So here we are in not so sunny Melbourne trying to keep our eyes open until bed time which is extremely difficult, so we are keeping ourselves busy. Fraser’s mum and dad live right in the centre of the city and we mean in the centre of the city. They are two blocks from the Melbourne Town Hall living in an apartment.

It was great to be able to have a shower at Barb and Trevor’s apartment and feel reasonably recovered. Had the ubiquitous cuppa tea and lunch and then time to get outside in the fresh air to try to stay awake.

We popped into get SIM cards for our phones; reactivate our Ozzie Visa cards; double shot of espresso and then drove out to the suburb of Heidelberg which is about 30 minutes away to our friends Belinda and Dominique. If you read our blog from last year, you may remember we met up with these guys at Dominique’s parents place in Rodez, southern France. The ones that had the not so small chateau.

We are bunking up with these guys as there isn’t enough room in Fraser’s parents apartment plus these guys have a pool that we will utilise!!!! Only in a Melbourne for two nights then up north. 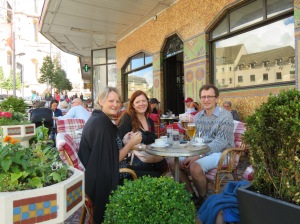