WOOOW!!!!! What an amazing day. When we first planned this trip it was all about touring PEI, New Brunswick, Nova Scotia and making sure we did the Cabot Trail in Cape Breton. We chose the dates because it was after the schools went back and before we headed off to Australia. We thought there might be an opportunity that we would see the fall colours but today we discovered that we lucked out big time.

You will be bombarded with lots of autumn 🍂 photos in this blog. We were driving through the Cape Breton National Park most of the day so there is quite a mixture of trees including the Canadian staple the pine tree. This throws in a lot of green to the vista that you will see in these photos. The further south you go into places like Maine, New England and Upstate New York, you will not see the green trees like you do here. We drove the Pocahontas Trail which goes from Boston to Niagara Falls many years ago and we got the full height of the colours and they are more vibrant down there but the green adds in another dimension. 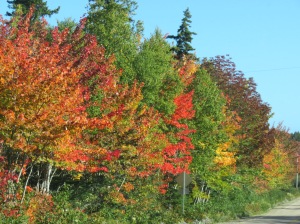 Once again, photos are not going to do the scenery that we saw today any justice.

….blue sky, calm sea and sun! We will not deny that it was cool at 8c with a nippy wind coming off the Atlantic Ocean at times. Two days ago it was the most miserable weather and now this.

Our day started in Baddeck where we were off and running by 8.30am….an absolute first for this trip. 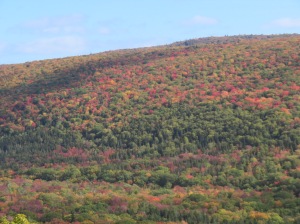 The Cabot Trail makes a 297-kilometer loop around a sizeable chunk of the island, passing through the Cape Breton Highlands National Park at its northernmost point. A 950-square-kilometer, flat-topped plateau cut by deep river valleys, this wilderness is home to moose, black bears, and bald eagles. Mostly, the Cabot Trail skirts the edges of the park, at times clinging to steep ocean side cliffs. 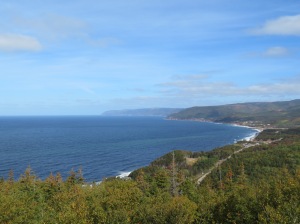 The Cabot Trail was named after John Cabot who was an Italian navigator and explorer born in the Republic of Venice. His 1497 discovery of the coast of North America under the commission of Henry VII of England was the first European exploration of coastal North America since the Norse visits to Vinland in the eleventh century.

No, this is not John Cabot……

We drove up the east coast of Cape Breton then drove West through the National Park. We stopped off at a very famous walking path called the Skyline Trail. It takes you on a two hour hike out to a bluff where the views are unreal. 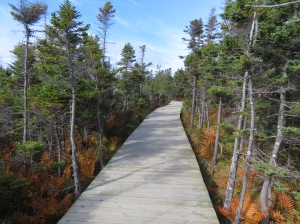 It is a very well maintained pathway with boardwalks and at times did feel a little like Grand Central Station. 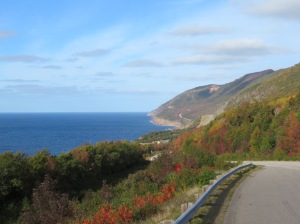 It was very easy to look through the business of it due to the views. Tonight we have bunked up in the little Acadian town of Cheticamp which is on the west coast of Cape Breton in a B&B.