Forgot to mention that we actually crossed from the province of Nova Scotia to New Brunswick yesterday.

Just a bit of FYI for you. According to the Constitution of Canada New Brunswick is the only bilingual province. About two thirds of the population declare themselves anglophones and a third francophones. One third of the overall population describe themselves as bilingual. Apparently maths is more difficult for all of them.

So we went to bed last night with the wind howling and the rain pelting against the windows, dreading what we would wake up to today. Well, it was still howling wind, no rain to start with but a real pea souper.

Our first port of call today was down to what is called a Block House – small fortification with cannons and guns to fight off the intruders. 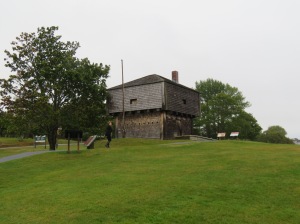 After the American War of Independence 1812-1814, a lot of the people on the losing side who were called the Loyalists (loyal to the British Crown), hightailed it up to Canada and set up residence. They built many of these Block Houses along the coast to fend off the yanks if they headed north. There is only two of these Block Houses left standing in the Maritimes so we thought it worth a visit.

Next stop was a visit to the rather nice Algonquin Resort which is probably the best hotel in New Brunswick. We didn’t know anything about it until July this year when they had the Provincial and Territorial Premiers conference there, with of course the obligatory media releases from out the front of the hotel. We had a wander around inside and it was very nice without being fufu. We met resident hotel dog who had obviously been fed way too much and had a very friendly natter with one of the young ladies behind the desk. We have found everyone in the Maritimes very friendly and chatty and not in a hurry to race off and do something else. 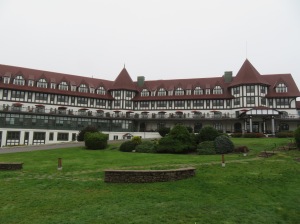 Third stop was to the Kingsbrae Gardens. Lots of water features along with a sculpture section (couldn’t get our heads around that) and finished off with a lovely cuppa at the tea rooms…… 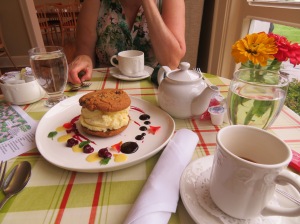 At least we shared it. 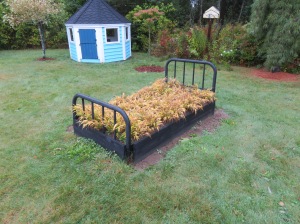 They have big tools in this part of the country!

Lastly, can you please name this plant for us. If you are Australian, we expect you to know the answer!!!

It was time to leave St Andrews by the sea and head back towards St John and onto the Fundy Trail. This is a section of road that runs for about 30k’s right along the spectacular cliffs edge laying out a magnificent vista towards the Bay of Fundy. Yeah right, look what we got. 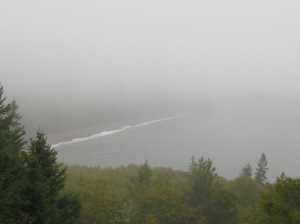 A real pea souper rolled in and then the heavens opened up on us. This drive is very well known and is a must do on the tourist track but for us it was not our lucky day 😟

We did get to see some good examples of the Fundy tides again so thought we would share the before and after shots with you.

Now you might say, but that is nothing, well that is after only 40 minutes of the tide going out. On Friday when we get to the Hopewell Rocks we will show you just how dramatic it gets at 45 feet.

Made our way to a not so exciting Sussex Corner where we have bunked up for the night.