Mixture of a day. We started with seven of the double banger locks which we are not going to be sad to leave behind. Unless you have a dancing partner to join you in these locks it is tough work for both driver and lock slave. We waved a not so fond farewell to our last one for the day. 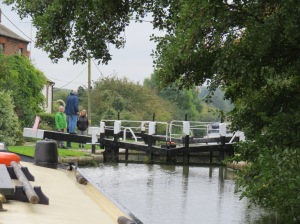 Whilst descending the locks we dropped into the Anchor Cottage craft shop which Wolfgang and Marlene had recommended to us. They have had a traditional water can personalized by the lady there who does all the hand painting and we thought it would be nice to see what she had on offer.

There was a great wooden duck with boots painted in the colours of a British Flag but it was a little too big for us to transport back. Instead, for this canal trip we have purchased two canal plaques. We purchased quite a number of these last year as we completed the different rings or canals. Not too sure what we will do with them all yet. At the bottom of the Ange De L’Eau can, you can just make out the Ashby Canal and Warwickshire Ring plaques. 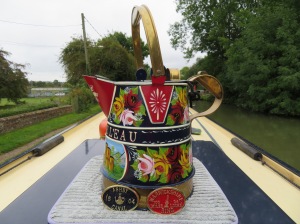 We haven’t come across a shop quite like this before with all the canal memorabilia crammed into one small store. It was hard to take it all in. We spent about half an hour talking to the lady who is the painter and how she and her husband had given up their “real jobs” to follow a passion. Gotta envy them!! 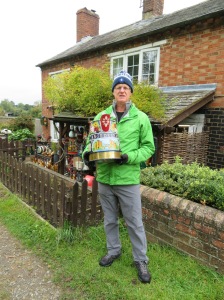 It has been a very cold day with only a high of 14c but when you are on the water it always feels that much cooler. We tried chasing the sun most of the day and caught a little here and there. We also wanted to enjoy the countryside we were gliding through as we are now in the county of Northamptonshire which is aptly named the county of Spires and Squires. Every which way you looked you were almost always able to see a church spire and some well established homes.

We also came across a number of kayakers who we were trying to avoid running over – didn’t want to scratch the paint work on the boat. We saw a couple of them go in for an unplanned swim but mostly they appeared to stay up right and away from us. 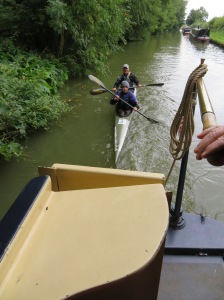 We managed to moor up for the night on the Northampton Arm of the Grand Union Canal just before the sky opened up with some light hail.