WOW, it was a tough day!!! 21 double locks all on our own with lots of leaky locks, high winds, fierce rain squalls, muddy footpaths and the list goes on and on. Having said that though, we have made it! Anya idea of us going out tonight to celebrate Marlene’s birthday is going to be a non event. We will celebrate with her when she returns to England.

We started with a couple of hours of casual cruising along a lockless section of a very rural landscape in dry weather. Our first feature of the day was the Shrewley tunnel which is well known for the fact that they built a tunnel for the boat horses to be walked through rather than going over the top of the hill and through the village. 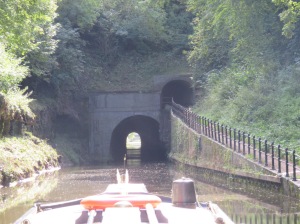 We got to the top of the Hatton flight at midday and set off down it having waited a while hoping someone might turn up to share going down the locks with us. No such luck so put her into forward gear and off we went. 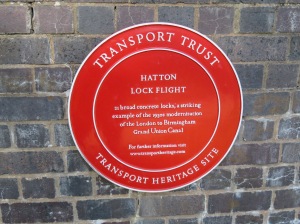 It is a lovely scenic view and in the above photo you can just make what we think it Warwick Castle which we are going to visit tomorrow. The lock gates were extremely heavy and there was no way we could swap around as Di would not have been able to manage them.

Originally the locks were all single chamber but in 1934 they were modernized and made into double locks to help with traffic flow as this was the main canal between London and Birmingham. This at a cost of a million pounds at the time. It seems it was a little too late as by then the canals were in full decline.

The locks are quite intimidating as the 21 of them are only over a distance of 2 miles. In all it took us 4.5 exhausting hours and sometimes in atrocious conditions. We still had the strong winds from yesterday but just for good luck old Hughie chucked in drenching showers.

We finally pulled onto a mooring at 5.00 pm and between us there has no been very much banter at all! The fire was put on to help us thaw out our cold old bones and a simple quiche for dinner. Tomorrow we have no locks and no canals and will be in full tourist mode which we need after this latest escapade. 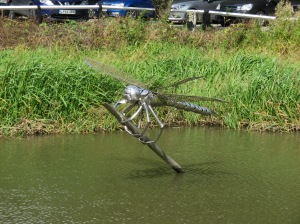