Magnificent day for a canal cruise. It has the lovely little nip to the air to indicate that autumn is on its way. We both slept very well last night and actually hit the sack at 9.30pm which is awfully early for us. It was probably a combination of the stressful drive to Birmingham city, catching trains and at least 8 hours out in the fresh air.

Last time we started on a canal boat in 2016 we spent the first two weeks being very tired and we thought it was due to being out in the fresh air and this confirms it to us.

So this morning we got up early as we wanted to be one of the first five boats going up the Foxton flight. The Foxton flight consists of ten locks in two groups of five in which there are two staircases. The definition of a staircase is one lock on top of another without a gap in between. So this meant that after five locks we had a small pound and then started on the second staircase. 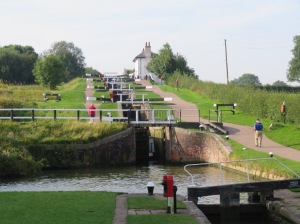 What they do is send the boats up in a group of five and then once they are out of the very top lock they bring five down. All going well it should take you an hour – which in our case it did as we have a very experienced crew – lots of back slapping going on.

The flight is set in beautiful rolling hills with great views. This staircase is a little unusual in that the locks are actually built up high and not cut into the ground. This gives you the feeling as though you are flying over the country side.

This weekend is the last bank holiday long weekend for the summer and with the great weather all the gongoozlers were out in force. Wolfgang suggested we start early so it would be cooler, less waiting time and less gongoozlers and he was very correct. We walked back down the locks afterwards to get some milk at the bottom of the flight and by then the place was just teeming with people. You had to fight your way through the crowds on the towpath.

The photo below was taken when we first started off and as you can see there were already people gathering at 8.00 am.

After climbing the flight we had a brief stop and then headed down the Grand Union Canal, Leicester section.

The staircase was always there but it became a real bottleneck as this is a busy canal. They built this very ingenious contraption called an “inclined plane” to bypass the locks. It was like a lift that went up an incline using ropes and pulleys and large buckets that were filled with water and had the boats in it. They counterweighted one another and cut the time down to 12 minutes. It is a little strange as they did not build it until 1900 which by then the canals hey days were well over. It worked extremely well but only for ten years. It needed a big refurbishment in 1911 and rather than do that they just fixed up the locks and mothballed the incline plane. Of course it then fell into disrepair.

They had a great model of it in the museum and hopefully this will explain it better than the way we have put it.

We had a walk around where the inclined plane was and there is not much left of the site. There has been some murmurings of maybe re-establishing it but it would be incredibly expensive, so do not think that is going to happen any time soon.

We then did the Husbands Bosworth tunnel (1170 yards) – not sure how it got this name.

We stopped along the way for a great bite to eat and on the towpath was this great statue of a canal horse. Horses were very instrumental on the canals until the boats became motorized and having a good horse dictated how well you did but you needed to look after them. We are thinking that they were well looked after as they were very expensive to buy and time spent training them was valuable. There is still evidence along the canals of stables which they have turned into many uses such as cafes and people’s homes.

We then made our way to Welford where we went up the arm. We have moored up here for the evening and hopefully things will start to cool down a bit as it is incredibly hot. We know, we should not complain!!!!
As we are back on the cut we have the old problem of poor wifi so please bear with us if we do not post every night.