So, things appear to be on the improve cruise wise. We left Southhampton at midnight to cruise to Rotterdam. As we are behind time we will be bypassing the Zeebrugge stop. We thought to ourselves that it would take about two hours to get to the white cliffs of Dover so we would unfortunately miss them. The white cliffs are very symbolic to us of England and it would be sad to miss them but at 2.00am there isn’t much we can do about it.
Anyway, for some unknown reason, Di perked up bright and early and decided to do a bit of reading not realizing that at 6.00am we were cruising right passed them and if she had of looked out of her cabin she would of got a spectacular view. Bugger. On reflection, we noted that from Southhampton to Dover was half way to Rotterdam, so our guesstimate of 2.00am was way out.
So cruised into Rotterdam at 6.00pm but it took two hours to get up the estuary. It was certainly interesting as Rotterdam is the (we think ?) largest port in Europe and a very busy one at that. The channel was extremely narrow. 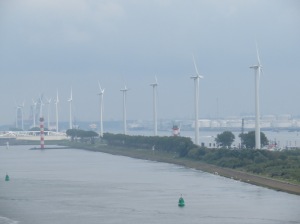 We couldn’t get any photos of the wind farms at sea as they were just too far away. Any opportunity they have they stick one up as you can see.
We passed by one of the Holland America boats and in fact it was a hot seat change as we moved into their dock as they moved out. 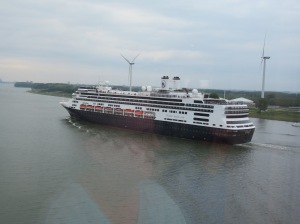 The Rhine river empties into this huge delta around Rotterdam, so technically we are on the Rhine river. We are starting to see lots of long, wide, low barges which we think are mostly transporting fuel up the Rhine after loading up in the port.

Rotterdam was obliterated during WWII so it has been built from scratch which makes it a very new city. They have used this in their favour and allowed the architects to go berserk!! 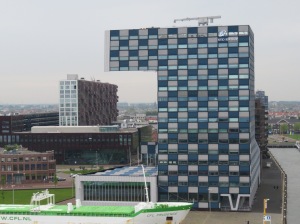 There are still the odd old building that withstood the bombing. 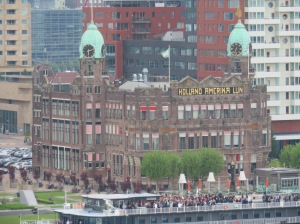 What gives it away of being a port city?? 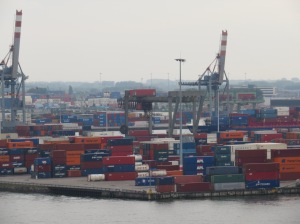 We got off and then caught a tram into the main railway station as we have a plan!!!!! Super groovy central station. 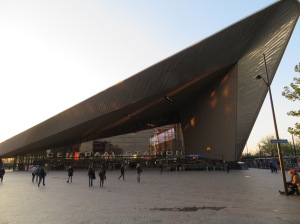 As some of you know, after the Baltic cruise we are off to Norway for eleven days and we’re a bit concerned about the weight of our bags that we need to drag around courtesy all our bike gear, plus one of the wheels on the bag is getting a little temperamental. So after contacting Ali and Ads in Hilversum, we are going to pop up there tomorrow with our excess luggage and leave it with them. So we went into town to go check out train timetables.
After fluffing around a bit we tried to make our way back to the boat. And when we mean tried it took us a total of five trams to get back to the boat which was only three kilometres away. We were getting on some going the wrong destination ; right trams only they were going the wrong way; or terminated early. Good thing we are in port until 6.00pm tomorrow.
Got the chance to take a few photos of Rotterdam before the sun set. This is called the Eramus bridge which as you can see is spectacular. It looks from a distance that it is a foot bridge but it does carry cars and trams. 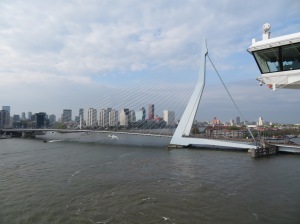 This gives you an idea of the size of our tub. 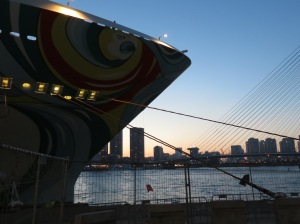 Back to our cabin to sort out what is going to stay in Hilversum until our return in three weeks. We are stunned as to how much we are going to ditch. In fact, it is one whole suitcase.
Some of you are no doubt asking why we have not posted any photos of our towel animals. Well, Di has been saving them up so that she could take a photo of the zoo. The eyes they stick on are not very sticky so she made up some eyes and used nail repair glue to give a better effect – let’s hope the boat doesn’t notice why a lot of their towels have eyes stuck to them. 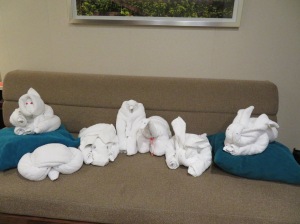 So from left to right we have:
A monkey, turtle, pig, penguin, dinosaur (neck is now soggy due to humidity so tooth brush being used as prop), dog and rabbit. No doubt it will all start over again for our next cruise.
Saw this thing from our cabin. It is one of those tourist buses that also turns into a boat. It certainly did not look stable in the water. Has put us off ever trying one of those things. 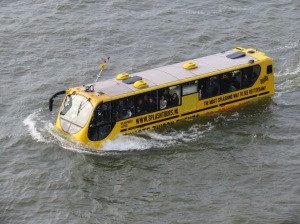