Addendum to the evening of the 27th September. We had the delightful pleasure of spending the evening in the Star Inn in Stone with Lynne and John who drove across from Wolverhampton to say goodbye. It was about a thirty minute drive for them and on a weekday night it was an effort and one we appreciate that they made. It was a fun few hours before we had to say our adieu’s at 11.30pm. They, returning to Wolverhampton and us walking back to nb Lucy for our final night. We didn’t take a flash light with us and there was a strong possibility of one of us going into the canal as it was pitch black, but our statistics are still correct with no unscheduled swims.

It was all gang busters this morning doing the final packing whilst Fras caught the train to Stoke-on-Trent to pick up the hire car and then to battle his way back on the narrow roads to Stone. On the final walk through of the boat we found the one lost sock and horror of horrors our back up disc which we had secreted away behind the television and promptly forgot about.

Locked nb Lucy up for the final time and passed on our left over bottle of Bailey’s to Karen and Peter from Canal Cruising Company.

It was now a trip down to Leamington Spa to catch up with Wolfgang and Marlene for a final farewell. We opted to take the A road’s rather than the motorways as wanted as much opportunity as possible to see any of the canals and countryside. After spending the last four months going at a max speed of 3 mph, 50 mph on the road put the real fears into us.

We made only one wrong turn which was quickly rectified. We also decided it was time we got into the 21st century and used the GPS/google thingy on the ithingy to guide us down – but – of course we had the road map on our laps just to double check. Nick would have been proud of us.

Wolfgang and Marlene were moored up outside a perfectly satisfactory pub establishment as pre-arranged at Leamington Spa and it felt so normal to call our “knock, knock” and climb aboard Ange d’leau. We had our usual espresso courtesy of Marlene’s machine (we are going to miss that big time) and spent a good hour or so catching up since our last meeting which was only a few weeks ago. It always appears on this blog that we spend a lot of time sitting around talking and drinking. Well, that is the way of the canal life.

We went in and had a lunch and then it really was time to bid our final farewell to our new friends.

Many people have asked us what is our most favourite memory of our four months on the cut and we would have to say, it is the wonderful people we have met and made friends for life. 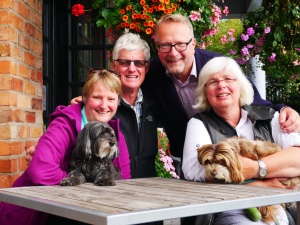 So it was back into that really scary speedy machine to head down south to Heathrow.

Our final hour of travel was down the M40, M25, M4 and onto the endless road of Heathrow hotels. We could only find one hotel near the airport that would take dogs and it was the Sheraton Skyline. These two mutts better not get use to this life style as it is home to basics in 24 hours.

So we pull up and as the standard reception area was busy they requested we use the Silver and Platinum Members carpeted check-in area of which Maples made herself totally at home by rubbing her ears along the carpet and then rolling onto her back and exposing herself. At least Toques just sat there looking cute blending into the gold coloured carpet. You can take the dog out of Calgary, but you can’t take Calgary out of the dog.

So, here we are sitting in a pretty standard hotel room which has set us back a whopping £169 – bloody hell!!! This is the last of the big extravagances.

There will be one final blog posting tomorrow with some stats from our blog site and no doubt telling you all how Toque howled her way down the carousel!!!. 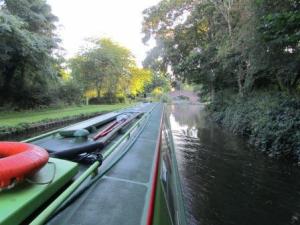