Goodness, who can believe it that we are into our final month of being water gypsies. The bank account can but we are finding it rather hard to think that we have started our 14th week of 18 weeks. The mornings are starting to remind us that the seasons are changing as there is crispness to the air again. When we first started out we were sleeping with two doona’s and wearing our toques on the back of the boat each morning. Those times are back again. The leaves have also started to change and we are seeing more and more of them on the ground. Here is hoping we will get a lovely autumn and see lots of colour.

It was a wickedly early start to the morning. We were off cruising by 6.40am which is the earliest to date. A certain person who will remain nameless was still sleepwalking at 7.30am even with a cuppa tea inside him. Our early start was necessitated as we are now on a tighter schedule for this last month as there is a bit more that we want to fit in.

Of course at this hour of the day you are now getting great sunlight for photos. 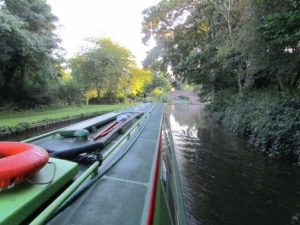 Our first tunnel of the day with perfect lighting. 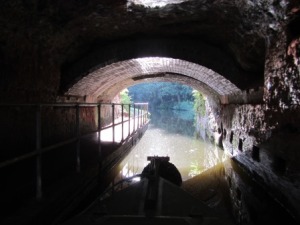 A beautifully tended cottage. You can just make out the guy on the right hand side of the house watering his plants.

We have quite the amount of locks today. Our first big flight was of 20 raise up 145 feet. 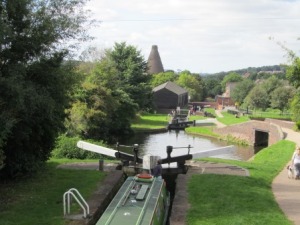 We went passed some lovely back yards and one was so well manicured with a lock overflow streaming running down the bottom of it. The owner had made a wonderful effort to incorporate this pseudo-natural water feature. Unfortunately we were not quick enough to get a picture.

On our way through the Stourbridge Locks we passed one of the original old work boats that belongs to Canal and River Trust. The guys said they were moving it down to Stourport for a canal festival that was occurring in a few days. All the people helping to move the boat were volunteers. If it wasn’t for the hundreds of volunteers of the waterways, we are pretty sure they would not still be surviving. 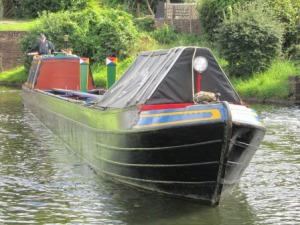 Some of the gates on the locks were pretty viscous and when you opened them even slowly the volume of water that came in was excessive which caused nb Lucy to get really bounced around and the crockery rattled. You can see from this picture the amount of foam that is created by the turbulent water.

We are now off the Saffordshire and Wocester Canal and onto the Dudley No. 1 Canal which is all part of the Birmingham Canal Navigations. Now here is a bit of trivia for you and a good one to throw at people who prattle on about Venice. Birmingham has more canals than Venice. This is due to the fact that it was the power house region during the Industrial Revolution of the 1800’s and the canal’s being the highways were the only arterial way of getting raw products and finished goods in and out. In fact, it got so congested with boats that they had to double up on some of the canals. You need a damn good map of this region to be able to find your way around. We would never have thought that we would ever get lost on a canal but around Birmingham that is not a hard thing to do – get lost that is. 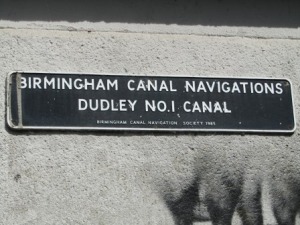 After a quick lunch stop it was back to the job of cruising and to tackle the next flight called the Delph locks. Now this has to be one of the prettiest set of locks that there is on the system. They are not mentioned that much because the area they are in is a bit rough but take that out of the equation and you certainly have a gem.

This picture is taken below the flight and each lock has a cascading waterfall of it’s own. As you can see, the obligatory fisherman. Actually, we did see a rather elderly lady a bit further up the flight who was fishing – you go girl!!

There are seven locks in the Delph flight. We are going to put a few photos in of these locks to help give you some idea as to how pretty they are. With the locks we climbed 85 feet so each was just over 10 foot deep.

You can see nb Lucy as she is making her way through the last of the locks. We were blessed with the weather today. 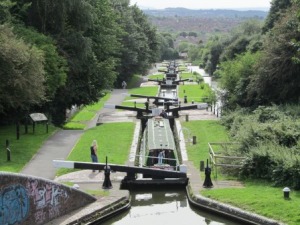 Another item we are seeing around this region is the fantastic old wrought iron bridges. As all the oldies grumble – they don’t make bridges like that any more.

Another lovely site was this old pumping station. Water was a precious commodity for the canal system and there were often fights between the mines, farmers, factories that relied on water wheels for power and the canal system as to who got how much. There are still problems even today for the canals regarding water levels as you can imagine that the locks use a lot of water. You must be always very conscious of how you use your lock water and to always conserve as much as you can. Today of course they have lots of pumping houses to get the water around but at times they will close canals if there hasn’t been enough rain. As you all know having read this blog, lack of rain water has not been an issue this summer. In places the canals have been overflowing the banks. This does create the problem of not being able to get under bridges but nb Lucy is a very squat girl.

At the end of the day we had done 33 locks and cruised for 9.5 hours – a record indeed and the bodies are very wary indeed not to mention two pooches who can hardly raise their heads. The day before on the train plus this full on day has exhausted all of us and we literally fell into bed.

We have moored up at a place called Netherton which apparently has a bad reputation for yobo’s. If there is no blog tomorrow you will know that the yobo’s came and got us.