It was certainly surreal waking up this morning in the centre of Liverpool on our floating green machine. We certainly stand out amongst the swish and swanky privately owned boats. It is very rare for a hire boat to come into the docks as most hires are not long enough for people to reach here. Some hire companies also do not allow their boats to make the passage due to insurance limitations. We have been very fortunate with the Canal Cruising Company as they have allowed us to go anywhere – so far. The other thing that interests the other boaters is the actual boat as to the fact it is out of Stone and normally these boats are never seen this far north. So we are quite an oddity in so many ways and not just because we are as old as the Ark.

There she is, nb Lucy taking pride of place in the middle of the Albert Dock.

Last night we had a wander around the docks area and found the Beatles statue which is very well done. 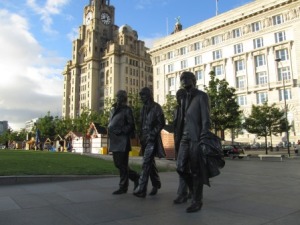 Bet you thought you knew who that fifth Beatle was – well you were wrong!! 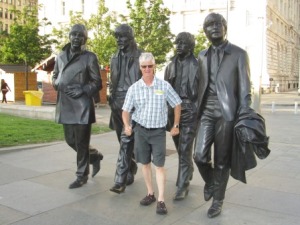 An oddity on the promenade we discovered was this café which is based on a Russian idea. You pay 8p per person per minute to go in there and make your own tea and coffee and help yourself to all the light snacks including breakfast if you so want it. The stipulation is that you must wash and dry your own dishes prior to leaving. There is no charge for the food. It is set up like a huge lounge room with many comfy sofas and chairs and coffee tables. There are board games and free Wi-Fi. We spoke to the person at the desk as we thought it might be a not for profit organisation but it is a going concern and makes a handsome profit. They record your name going in and then you pay going out. It cost us £6.50 and we had more than enough to eat. The dogs were also allowed to go in. The café was in a fantastic old warehouse with the concave brick ceilings, wrought iron roof supports and low ceilings of 7 foot. They tell us there are 16 of these café’s around the world. Great idea and this one was well utilised. It was tucked away though but we would say word of mouth is all they will need to advertise themselves.

Another oddity which took Fraser’s fancy was this little charmer.

It was extremely blowy last night as we walked along the Mersey taking in the sights. You can easily see the ocean just down the river mouth. The tides in the Mersey are phenomenal. Not as much as the Bay of Fundy but probably not too far behind it. This photo gives you a little indication of the height of the tides. This is where the Mersey Ferry leaves from to cross to the other side. 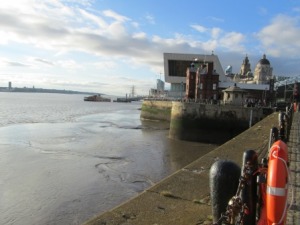 We were on the ferry for about 50 minutes and just rode to the different points of call. By gum, it was blowy. With our bus ticket we were also able to catch the Mersey Ferry to the other side. Not overly enthralling but it gave you an understanding as to how wide the Mersey is and also how fast the tides are. Prior to them building Sid’s Ditch which we came in on yesterday, the narrowboats use to have to go out onto the Mersey at low tide for about two miles and then come back into the docks. The river flows at 14 knots so that would have been one hell of a ride. We are very grateful to Sid for his ditch!!! 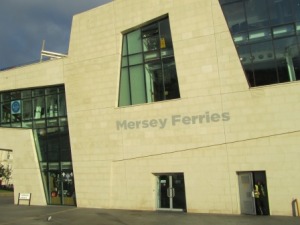 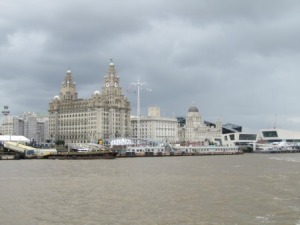 This morning we got on a Hop-on-Hop-off bus to get the lay of the land and a bit of the history of Liverpool. Good rounding but the guide had such a heavy accent he was near impossible to understand. They allowed the dogs on the bus providing they were small and well behaved. These two pooches are seeing an amazing amount of England and continue bringing in the crowds. 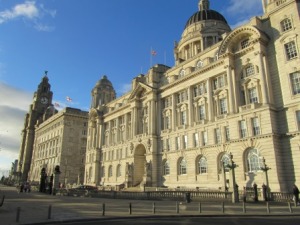 They are quite masterpieces. The one above with the dome was the Liverpool port authority building. 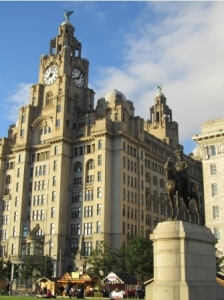 This one above is the famous Liver Building which used to be a huge insurance company for the port where 40% of the world’s cargo use to come through. You can just make out the mythical Liver bird.

Cunard use to have the original headquarters in the other building. They moved their offices to New York back in the 1960’s. 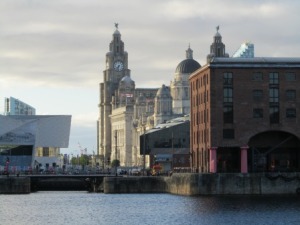 This is our view from the nb Lucy – pretty bloody tough to handle.

They estimate that there were over 9 million people who left from the Liverpool docks in search of a better life in the New World. This statue is to commemorate them. I guess a lot of us actually came from here originally. We know Di’s lot did though some of them also went out in chains for stealing a loaf of bread during the potato famines of Ireland.

There was a magnificent Argentinian training ship in port which was hard to pass by without noticing. 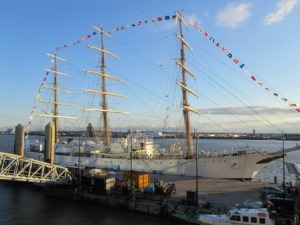 There are numerous museums around the docks area and all of them are free. Fraser went into the Liverpool Museum whilst Di took the pooches back to the boat for a bit of a rest before we head out again to pick up Nick from Lime Street Railway Station at 4.30pm.

Once we had Nick ensconced on the nb Lucy we then went with W+M to dinner as our last supper together.