Happy Canada Day to all!! We are thinking of you all and thought we would take the day off with you to celebrate.

Good omens all round today. The drive belt arrived and they even delivered it out to the boat for us. It only took the boys about an hour to fit it. They say it was a little tight getting it onto the shaftie thing but all in all the boys were extremely happy.

The true heart of the narrowboat

Whilst the boys were doing the “heart transplant” Di had some visitors who came a knocking…. 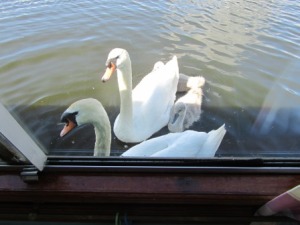 On the “road” so to speak for the two hours of cruising into Leeds. 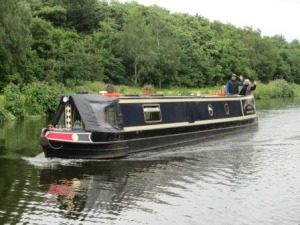 We had four large locks to go through today and all these are automated which is so cruisie. When in these locks you need to secure the boats to the side of the walls as the force of the water coming in under the front gates really throws the boats around – Fras stood on the roof of nb Lucy pretending to surf.

You do get to see some unusual types of boats on the waterways with many personal modifications – this one took our fancy a bit.

You know it is pretty cool coming into the center of a city via a canal. Not too many places you can do that. The piers for the narrowboats are right in the middle of town in the old dock yard areas which have been extensively gentrified over the years. Some of the apartment designs do look rather bland though. 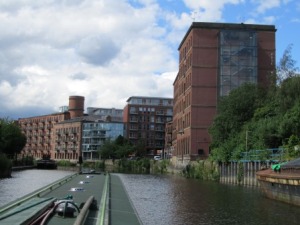 It was very busy in the marina so we had to tie up three abreast. Providing all three boaters agree to it this is not an illegal option. Only bugger is that if you are on the outside (which we are) it is a bit of a tightwire walk to gets across all three boats with the pooches for their bathroom breaks.

We all wandered off for some fish and chips tonight being Friday night and also as a celebratory meal regarding the drive belt being successfully installed. If a call out service had of been used it was going to cost £150+ whereas by sourcing the belt ourselves and putting it on ourselves it cost a grand total of £20 plus fish and chips for four.

The weather has turned really cold and windy along with the obligatory rain. We nestled in pretty quickly after a walk around the marina area as an early start as off to York in the morning.