We had posted our blog regarding the high viz jackets yesterday but thought we would add a little info about our pooper learning day. Up until now we have only had to have one pump out for the sewerage tank which we did over two weeks ago but we are certainly due for one now. The only place to get these pump outs done for you is at marinas but we are finding that a lot of marinas do not do them up in this part of the UK. You can manually do them at the service centers that the CRT have along the towpaths but our instruction manual on the boat categorically states that we are not to use them. We decided to ring our marina in Stone and ask them for guidance.

Very rarely do any of the boats from the Stone marina come this far north so the marina staff are not that au fait as to what facilities are available regarding pump outs. We told them our dilemma and very nonchalantly they said for us to go ahead and do it. This is going to be very handy for us going forward as we don’t need to keep planning for pump outs at marinas and we are not sure of our capacities when we have guests on board. Nb Lucy, as we have mentioned, is about the same vintage as the Ark and has no dashboard as to when the different tanks need emptying or filling.

Of course the first time you try something new it is always a learning curve. We didn’t do too badly with the pump out but there is a little room for improvement. We are going to be absolute pro’s at the end of this four months!! Poo Kings Extraordinaire!!!

We encountered our first large automatic lock where the only energy that you need to expend is the tip of your finger. We have quite a few more large locks to go over the next few days but as this was our first big one it kind of blew us away. These locks are about 150 foot long and having spent most of the last two week squeezing our 60 foot boat diagonally into 57 foot locks this was a complete change for us. Our boat looks ridiculously small in these locks.

The other interesting item was also this aqueduct that we went over. This bridge was the prototype for the Sydney Harbour Bridge but of course on a much smaller scale – well that is what the guide book tells us. You can just make out nb Lucy crossing it.

The heavens opened on us last night just after we had moored but then it was followed by three hours of absolutely beautiful sunshine. We did some shopping last night also so we are stocked up ready to go. On our walk to the supermarket we crossed a foot bridge in Castleford with a little reminder to boaters not to try to attempt skiing down weirs with your boat – we would have thought that was a bit of a no brainer.

We had a couple of visitors come knocking at the kitchen window last night. We should not have enticed them with the white bread but just wanted to get one photo shot of them. This was a mistake as they kept coming back for more. Had to shut the window on them in the end.

So today we are on our way to Leeds. We left Castleford at 8.15am for a cruising time of about 4.5 hours. We are cruising on a very wide river with no scenery except for trees and swans. After about an hour we came to this enormous lock that is 150 foot long by 20 foot wide. We looked like a little pea in a pod inside this thing. W was there to meet us as he had moored up for the night above the lock.

This photo does not quite do the size of the lock justice but you can see the volume of water coming in under the front gates which really buffet the boat around so you need to secure the boat to the side of the lock. Thank goodness this is also automated.

W discovered this morning that his drive belt on his engine is frayed and that at any time it could snap. This is a scenario you do not want to happen when you are on a river so we have been calling around different marinas to see if they would come and do an emergency call out. This is going to be very “sehr teuer”.

After quite a bit of investigative work we have finally sourced a drive belt which will get delivered tomorrow morning at 10.00am provided the Royal Mail will do what it is meant to do. Meantime, W and Fras pulled parts off the engine after consulting the manual in preparation of the delivery.

Fras and Di decided to utilise the rest of the day by going into the town of Rothwell and taking Mapes to the vet as her eyes have become increasingly gunky with goo. We rang up this particular vet and caught a taxi there. On arrival the receptionist informed us that we had called their other location and they would not be able to see Mapes until tomorrow. Meantime, the vet poked her head around the corner saying she could see Mapes but the receptionist bit her head off – she was definitely having a bad day. We hightailed it out of there and went to another vet around the corner called The Vet but known to the locals as the purple vet. Well, this turned into quite an adventure. 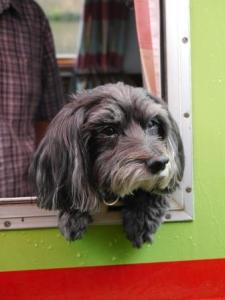 It’s always hard to get a photo of Mapes due to her dark face but this one has captured her brilliantly.

A number of things happened here. We met the vet who does not charge for a consultation fee if your dogs are immunised. Secondly, the vet was not only a vet but a lawyer and had another degree in marine mammals. As he was explaining all his degrees (he got his vet degree at Massey in NZ) he mentioned he was a time lord. We cracked up and asked where his Tardus was – then it got really interesting. He took us through the clinic, through the dispensary and then into the laneway and told us to stand out there and turn around – see for yourself…

He was really quite eccentric and an absolute delight. He said he was very wealthy which is why he does not charge consult fees. So in the end it was our gain and the first vets loss!! This is the sort of adventure that makes a holiday.

Have just spent the rest of the night catching up with a few little tasks and have dragged out the jigsaw puzzle again to try and get our head around it. Will post a photo of it on the blog when it is finished.

W+M gave us a few photos tonight and have attached one of the two of us doing some hard yakka.