Whoa, did it pelt down with rain last night and this morning but then it was all clear by 9.30am.

We got talking to another narrowboat couple moored next to us and he informed us that at 11.00am he was going out onto the tidal Avon and under the Clifton Suspension Bridge. If you read to the bottom of the blog yesterday you will know that Brunel designed and almost built to completion but died just prior.

We rang up the Harbour Master and asked what would be required for us to accompany the other narrowboat to the suspension bridge, and to do so safely. With a few knots in our stomach and just a bit of apprehension, we set off to be at the sea lock at 11.00 am.

We were pretty stunned that they allowed just two narrowboats into such a big lock and lowered the water especially as you consider the amount of water in the lock. They told us on the phone that it was a small spring tide and would just be a small drop in the lock. Guess they must be use to really huge drops as small to them was 4-5 meters which meant we had to tie additional rope onto our stern and bow lines. They can have 12 meter tides to contend with here we have since found out.

So far so good. Once the gates were opened it was straight into the incoming current. We were one and a quarter hours before high tide so not at its strongest. What we feel was more of an issue was the wind which meant hanging onto the tiller tightly and keeping her in a straight line as we went up the river.

Bristol is only six miles up river from the coast so this means this is as close to the ocean that we will ever or want to ever get to on a narrow boat.

We turned around after about a mile up the river in an area where we were protected from the wind.

We did not have to do much to turn the boat as the incoming current certainly helped us.

It was then back down the river at warp speed with the engine just ticking over and into the jaws of the lock. We just hung around the entrance for about five minutes after having moored to the wall and then they opened up the gates for us.

Once we were let into the lock we had to wait for a number of yachts plus a trip boat to come in before they would raise the water level. There is a severe storm warning out for southern England starting Friday and continuing Saturday and Sunday so many leisure craft are in the process of making their way back into safe harbour.

Shouldn’t laugh but not one of the yoghurt pots wanted to come near either of the moored narrowboats in the lock and once the door was open they were more than happy to let us go out first. Ah, the power of sitting on top of 20 tons of metal.

We made it back to our mooring in time for some lunch and then out again to do some more exploring. 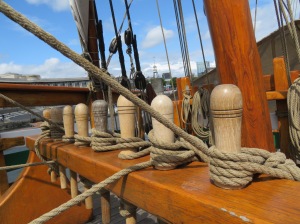 It was off to see the beautiful replica of the Matthew which John Cabot sailed in when he discovered Canada. Compared to the S.S. Great Britain which is just moored about 200 yards away, it is indeed tiny but what needs to be remembered is that this ship was built in the 15th century. 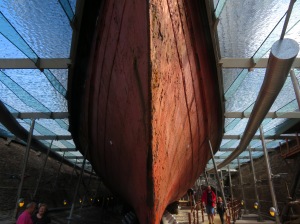 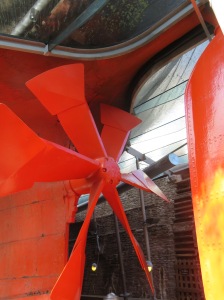 Next visit was to the S.S. Great Britain which is still under and will always be under repair and maintenance. It was a luxury liner for those who could afford it and for those that couldn’t, well, guess you were in steerage.

As you can gather, Bristol was a large port and was trading with countries such as Spain, Portugal & Iceland by the 14th Century. Bristol was England’s second largest city by the 1760s but the docks were losing trade to Liverpool as they were so congested and Liverpool had more capacity. The crowded City Docks also had problems when fire spread amongst closely packed ships. Bristol trades included exports of woollen and other manufactured goods and imports of sugar cane, tobacco, rum and cocoa.

The Severn Estuary has the third highest tidal range in the world (after the Bay of Fundy and Bay of Ungava, both in Canada). Ships were built stronger to cope with being stranded on the mud when the tide went out but the tidal conditions caused delays and congestion acting as a brake on the growth of trade through Bristol .

Bristol was heavily bombed during WWII due to the presence of Bristol Harbour and the Bristol Aeroplane Company. Bristol city was easily found as enemy bombers were able to trace a course up the River Avon from Avonmouth using reflected moonlight on the waters into the heart of the city. Bristol was the fifth most heavily bombed British city of World War II. The city that you see today is mostly of post WWII build.