We seemed to have saved the best for last of our stay in London but it is just how it worked out. After a quick breakfast with Lisa and Toque we headed out again and this time back to Buckingham Palace. 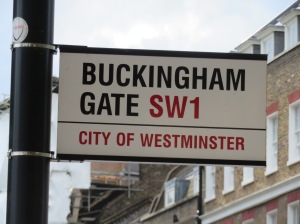 We had booked to do a visit of The State Rooms of the palace. We arrived a little early for our allotted time so watched the preparation for The Changing of the Guards Ceremony. 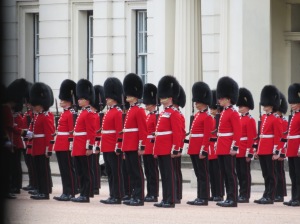 There was the brass band belting out a few tunes and one of them was a very well known strippers piece of music which did seem a little inappropriate- maybe we are just showing our age. 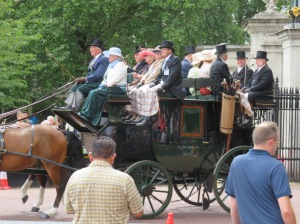 Something quite out of the blue and we do not know what it was about, but ten of these carriages laden with some very well dressed individuals paraded passed us on their way to the parade ground in front of Buckingham Palace. We didn’t have time to find out what it was about as our allotted time arrived for us to start our visit. 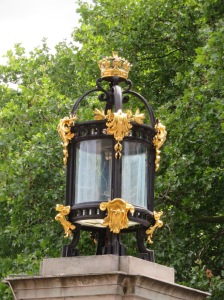 Alas, we cannot post any pictures as it was strictly verboten to take any photos inside the State Rooms. What we can tell you is that they are the most exquisite and beautifully maintained of any formal rooms we have ever seen in the myriad of palaces we have been into. What makes it all more poignant is the fact that the palace still functions for what it was designed for and of which we learnt is the only one still around doing so. Most of the renovations in the palace and the extensions were done by Victoria and Albert but obviously there has been sympathetic modernization done to improve its livability.

We got to see the front entrance in the quadrangle where they had the Irish coach which was bought by Victoria after the death of Alberta as it was more compact. Liz uses it to open up parliament. We went up the grand staircase and then into the various state rooms. One of the rooms was the picture gallery and there were many famous Rubens, Rembrandts, Constables adorning the walls. We only saw a fraction of what the royals own when it comes to art work. They have the largest collection of Faberge Eggs in the world thanks to Queen Alexandra (daughter in law to VR and married to Edward VII). She had the reputation that when she visited stately homes and she spied something she liked she procured it from the owner with nothing more than a florin changing hands. If nobility knew she was coming they would hide the silver! She got good at just dropping in for a cuppa. 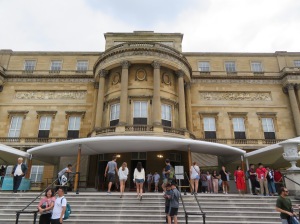 The Ball Room was indescribable and to think that Liz had to entertain that noxious creature Trump and his narcissistic family in such elegant surroundings. 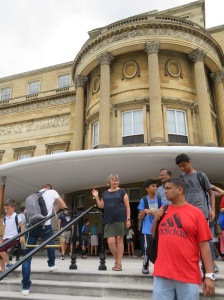 We came out onto the lawn where the Royal Tea Parties are held each year and here is Di standing on the same steps that Liz herself walks down as she commences the party. 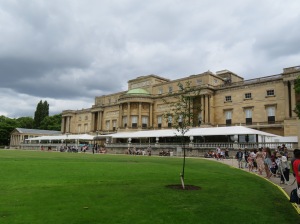 Now we did mention in an earlier blog that Liz was having to hang around until the new Prime Minister is elected so she can officially welcome him and then hightail it up to Balmoral. So it appears that Liz is around until mid next week but ensconced out at Windsor until she has to do the deed. Odds on are that it will be Boris Johnson rather than Jeremy Hunt. The bookies have Jeremy Hunt at 25/1. So if they end up with Boris the Buffoon, we can add him to the Demented Trump, Egomaniac Putin, Loopdy Doo Kim Jung Un, Egotistical Erdogan and the list goes on. 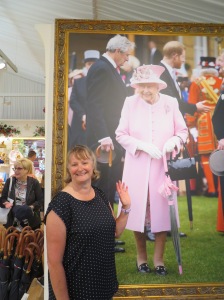 We went through the obligatory interpretive centre (souvenir shop) where everything was overpriced by 200% and then made our way back to the boat. If you are going to splash out £25 on a tour, we would highly suggest Buckingham Palace State Room Tour but you need to remember it is only opened for a short period during the summer months.

After a chat with Lisa and a fond farewell we headed out of the Basin and back along the canal. This was our final day in London and it has been a great time. We spent a lot of time in the parks and seeing stuff we hadn’t seen before but it was time to get back to “the cut” as we have even more exciting and beautiful places to see and experience. We cruised for five hours as the weather was perfect as we wanted to get back onto the main Grand Union Canal. We arrived at 7.00pm in gorgeous evening light where we filled the boat up with water and partook of the 24/7 Tesco at the junction. Our larder was rather bare and we didn’t want to stock up in London as prices were just that wee bit over the top.