Our first lock presented us with a bit of a Swan problem. Right in front of the closed lock gates was an adult swan with six cygnets. Mean while, at the actual lock winding mechanism stood another adult swan showing some very aggressive behaviour. 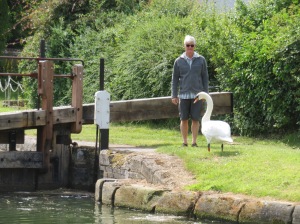 When these guys stand to their full height they are not small.

Once the lock was filled and the gate almost open, the swans milling around the gate shot into the lock and they were pushed to the end of the lock by both adult swans.

It took us a little while to work out but these guys do it this way so they do not have to walk along the path and negotiate a busy road. Once the bottom gates were open they very happily meandered out onto the lower canal. We were worried we might squash them in the lock but the adult swans kept them well out of harms way. Whether they would try this with two boats in the lock would be interesting to see. 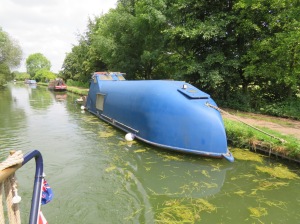 We have seen some odd things on the canals up north but it appears that those on the southern canals are even more eccentric. This is another type of life boat converted to a canal boat. 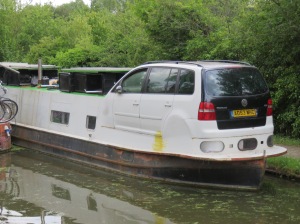 Then there was this beauty. Someone has a very fertile imagination. They actually steer it from the car using the wheel and it still had the car seats set up. We noted that the car windows were still functional.

Then there was this very sad sight. You don’t necessarily see a lot of boats sinking but what you do see is a lot of rusting hulks with people living in them. There are a lot of people living in boats on the canals as it is cheaper than living in a flat. Unfortunately, you do not see many of these live aboard boats being very well maintained. We have noticed it very slow going along this part of the Grand Union Canal as you are constantly slowing down to pass all these moored boats. We can’t remember this amount of live aboards up on the northern canals. You have to slow down so as not to cause the moored boats to bang around. If you have ever been in a boat when a speedster has roared passed and you are carrying a hot cup of tea, you get just a little peeved. 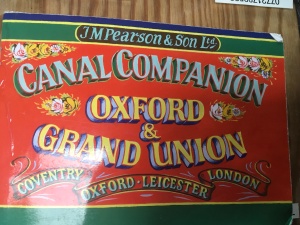 We use the Pearson’s Guide which gives you information on distance/locks/time to help you calculate your trips but with so many moored boats we are finding that the time is about 25-30% out which we need to accommodate for. 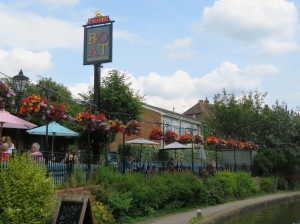 There have been some people who have put a huge effort into their flowers and this pub called The Boat is the stand out so far when it comes to pub gardens.

Lots of roses out in full bloom and aroma floating around which adds to the pollen count which at present is rated at extreme – you just have to ask Fraser who is dosed up to the eyeballs on Clarytin.

Sad news to hear that Ashleigh Barry bombed out of Wimbledon today especially against a non seeded player. It will probably be a Federer and Williams finals again. With the tennis, World Cup one day cricket on in and around London it is pretty full on sports. Chuck inTour de France with a very open field this year and it is hard for us to get behind the tiller for 4-6 hours a day. We did try to get tickets to the one day cricket series but we didn’t even make the ballot. The Ashes are also on after the World One Day cricket and once again tried to get tickets but with the same result. To see a day of an Ashes game at Lords would definitely be bragging material.

Last photo of the day is of a Canadian West Coast made totem pole transplanted by an owner of the old timber mill that use to be on the spot. Does look just a touch out of place. We did six hours cruising today which was pretty long and also fitting in a shopping trip to a local supermarket so are both pretty pooped. We are finding we are exhausted by the end of each day as we are outside the whole time. So far we have been lucky and the weather has been obliging but alas, it is amount to change so being outside all the day is not going to be quite so pleasurable.