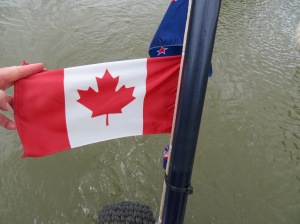 A very special day today for we Canadians to be celebrated with poutine and maple syrup of which we have neither. Today is also the first day of us flying solo. 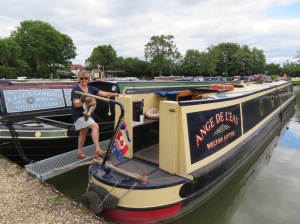 Marlene and Wolfgang have jumped ship as they say and headed back to Germany this morning and left us on our own to look after Ange De L’Eau. It was a little difficult to get use to all the empty space as four people on a six foot wide canal boat is quite different to only two people.

We spent the next few hours spreading ourselves around the boat, filling her up with water and doing a load of washing. As we were still connected to the shore line it seemed a good opportunity for us to get the washing machine into action. To be honest though, we were starting to get close to running out of clothes. 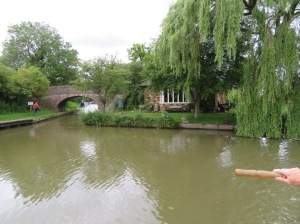 We set off early afternoon intending to get five hours cruising under our belt but alas, our plans went pear shaped. More about that later. As we cruised our way around Norton Junction and onto the Grand Union Canal proper, we managed to capture what you could say is a very quintessential shot of a stone bridge, house and weeping willow nestled on the side of the canal. 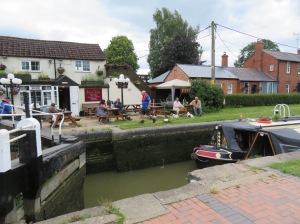 Next order of the day was the seven Buckby locks which will drop us down 63 feet. The small hamlet of Buckby is well known throughout the waterways as the home of the “Buckby Can”. In days old days there was no running water or plumbing in the back cabin, and the water supply lived on the roof in a water can (or two). 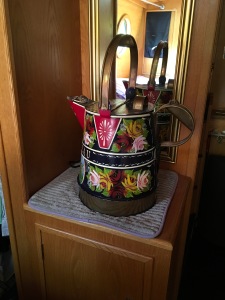 This is a fine example of such a can and Wolfgang and Marlene are the proud owners. 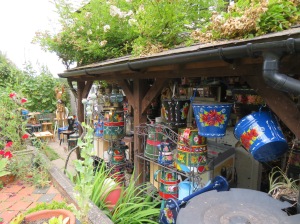 This store at Buckby is very well known amongst the canal gypsies and where certainly many of the modern day Buckby Cans come from.

So we go cruising through the locks with another boat who the operator of said boat tells us she is being paid to reposition the boat she is on. Sounds like a fun kind of job only she has made it difficult for herself by doing very long days. We go through the first four locks and then discover that the fifth lock is all bolted shut. 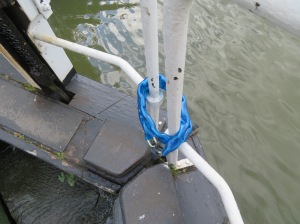 It appears that you have to be through the locks by 4.00pm or else you get locked in. Said “other boat operator” threw a hissy fit and carried on about having a traders licence and they can’t do that to her. After jumping up and down and harassing people on the phone she got some poor volunteer to come out and let her down through the remainder of the flight. She apparently still had five more hours cruising to do so that just told us that her time management skills sucked. She kept giving us updates as she wanted us to accompany her down the broad locks but we had decided to settle in for the night. We were squeezed in between the M1 and a major north/south rail line with Virgin trains screaming past every two minutes. We are both so tired from our nervous energy being Ange De L’Eau’s current caretakers that we could sleep through anything.