Hi all, we are in Tahiti today 23/04/2019, and this is the only internet connection we will have on this whole cruise. The internet is really lousy and have not been able to down load the pictures. Will update it on our return to Calgary. Hope you enjoy what we have written to date.

After Nuku’alofa yesterday, our expectations had been set at a more realistic level, but we were wrong. Vava’u was small but the island did seem a lot cleaner with less trash strewn everywhere. Last night we heard from some passengers that went on the guided tour around Nuku’alofa and heard that the Royal Family were in the back pockets of the Chinese. They have armed security around them at all times and have seven lavish compounds around what is a tiny island. One thinks that there is considerable corruption going on here. 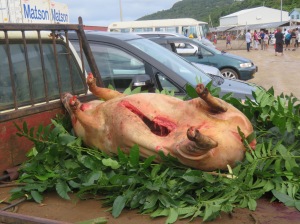 We were met by another work associate from Di’s cousin in NZ called Milla. She was a lovely lady and spent four hours with us taking us around the island. This pig that was all butchered with buzzing blow flies around it was off to Nuku’alofa for the Royal Family. Tongans are large people to begin with but their diet is causing huge problems with obesity and diabetes.

Whilst driving around the island we noticed this very unusual phenomenon. The four arrows are pointing to pigs who were hunting for clams!!! Yeap, you read right. These guys have evolved to dig out the clams and use their teeth to open them. There are a lot of pigs and piglets just wandering around the island as well as dogs and puppies. Somehow, we don’t think these are animals are that well cared for.

This is a traditional Tongan house which the locals still build at times as they find it cooler to live in. 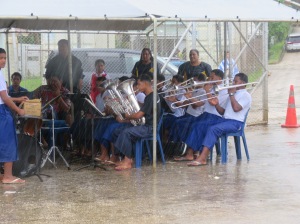 As we returned to the wharf the heavens just opened up and drenched everyone. The plus was that it was warm rain – and the band kept playing. We had another couple from the boat from San Francisco join us, Richard and Lorna which made for a fun trip for the day.

Our guess on this was a fish. We had to confirm in the morning with our towel folding expert that this was the case. 5/5!!!!

A couple of things are happening here today. Firstly, we are not going to go to the island of Nuie as the monthly cargo ship has arrived into the port of Nuie. Considering it only comes once a month, we are told the locals decided their food supply was more important to unload than a cruise ship. Made sense to us. Not good news but you just have to deal with it. This means we will be taking two days to cruise across to Rarotonga which is our next port of call. The seas continue to bounce us around and last night we felt at times like we were going to slide out of bed.

Order of the day started with an hour in the gym with great sea views from the very front of the boat. As we were rocking a lot it felt like you were pedalling downhill as the boat went down in the trough and then up hill as it climbed out of the trough. It was quite a weird sensation.

It was a good day to catch up on the laundry. The older Holland America boats have laundries you can use which is brilliant. They cost $2US for a wash and $2US for a dry so that is excellent value. We went on a newer Holland America ship a few years ago and they didn’t have laundry’s so obviously they have realized there is real money to be made from not putting the self serve laundrys in.

If you noticed the date on today’s entry you would have seen the Part B. For Aussies and Kiwis, we are very use to gaining a day as we go over the international date line from the west to east which is exactly what we did today. Going from east to west you of course lose a day. There is a flight from Sydney to Vancouver every day and it leaves at 12 midday and say on a Monday – when you arrive in Vancouver it is actually 10.00am on a Sunday – we all wish the bloody flight was that quick!! 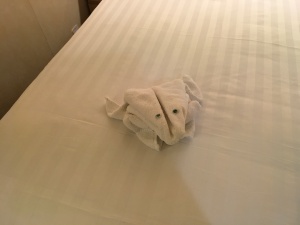 Rocking and rolling today. Southerly blowing up from Antarctica and giving us four metre swells.

Great panno shot from the boat looking back towards Avatiu, Rarotonga. We were lucky as we thought with the high seas yesterday we might not have been able to tender in but Lady Luck was on our side.

For $8NZ we were able to catch a bus right around the island and hop on and off as we liked. We went to a place just passes Muri Beach which is where the lagoon comes in and Fras went for his first snorkel.

Rarotonga is a protectorate of New Zealand and we were able to use the NZ dollar which made things easier. It was much more developed and cleaner than Tonga was by a long shot.

The water was a beautiful turquoise colour but the water a little cool and only 24c. Di was being a princess and wanted perfect conditions before she would get in. Fras said that the snorkeling was fantastic with lots of coloured fish and some larger ones. 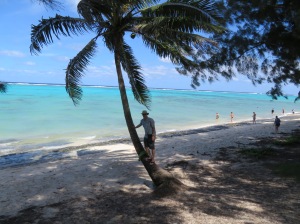 We went further around the island on the bus and Fras went for another snorkel and we were totally on our own. We then waited for a bus to pick us up. An island lady called Ana asked if we wanted a ride back to town and we said yes as we were not sure ho far away the bus was. She took us right to the pier and twice we offered her money and twice she refused. She said it was the island way and wished there was more of it elsewhere. What a great gesture. We will pay that forward. 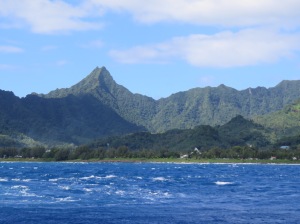 Back to the boat for a quick shower and race upstairs for afternoon tea in the restaurant complete with cucumber sandwiches and tea. Perfectly satisfactory. Fras has been hitting the gym very hard and even went again this evening prior to dinner even though he had done a full body stretch at 7.00am.

This one is rather obvious – a turtle 8/8. The other reason we are doing this counting is to remember how many days we have been at sea. Altogether it will be 25 having to count the 18th April twice.

Lazy, lazy start as didn’t poke our heads out until 9.00am. Got to do the wonderful job of doing the laundry again and attend a few lectures. We have our fingers crossed that tomorrow the seas will be calm as we will be at Bora Bora where we really want to do some snorkelling.

When we planned this cruise back to Canada, we knew we would spend our 30th Anniversary on the South Pacific High Seas but not exactly where as the itinerary always seems to change. We have been very lucky indeed to be at Bora Bora and with superb weather. 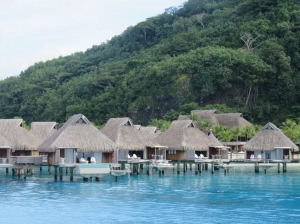 Fras had organised that we would go on a “Swim with Stingrays and Shark Tour” today which Di was thinking “Is he trying to tell me something”.

We first went snorkeling at an area called the Coral Garden and then they took us out to this other area where indeed there were a lot of stingrays and three reef sharks. We were told under no uncertain terms not to touch the sharks or else you would come back with fewer digits than when you went out. For us they did not need to repeat this piece of information but for some others it really did require constant reminders!! 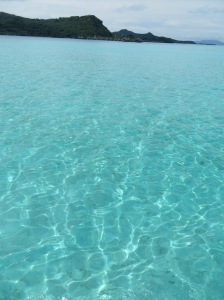 The water quality and visibility was just unreal. It was 28c and the water temperature was tepid to warm. We are not beachy people but if we were to go for a weeks sea and sand holiday this would definitely be the place. You could snorkel for hours as the different varieties and colour of the fish was unending.

Colourful group of guys who were at the wharf to greet us. We went to a place called Bloody Mary’s which is very famous for a bite to eat and has an endless list of famous people that have eaten there. The fish sandwich was great as was Di’s virgin Pina Colada. We caught the tender back to the ship as the sun was getting very intense.

Not a bad backdrop from one of the swimming pools. What we didn’t realize was that the pool was blimin cold after the ocean!! Once you get your toe in though, you must keep going otherwise you look like a woose.

Pretty quiet night after such a hot and hectic day.

We did go on the very top deck to watch as we sailed away from Bora Bora at 6.00pm – it was very magical. The remainder of our evening was quiet with dinner on our own rather than sharing with other people that we have always done for the other nights. Finished up at one of the shows and then pretty early into the sack as have another big day tomorrow.