We spent Wednesday around Nicks apartment getting washing up to date and setting up the next two weeks of travel. In the evening Nick, Maree and the both of us went into the city to a restaurant under the Story Bridge.

The food was Greek of which we shared all the plates and it was very, very tasty. 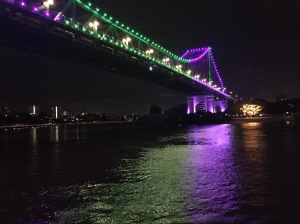 The views from the restaurant looking back towards the business district of the city were pretty stunning.

This morning we left Brisbane after nearly two weeks of very much enjoying our time there and staying with Nick and catching up with lots of our friends. We took Nick out to the airport as he was heading down to his parents home in Robertson for the next week.

We meantime drove down towards the Gold Coast as we were going to Wet and Wild which is a water fun park. We managed to scare the beejesus out of ourselves on some of the rides and discover just how many places on our bodies that water can find its way into!!

We spent three hours there in total which made us both feeling quite tired. Obviously we are not as young as we use to be. There were lots of stairs to climb and at the same time you had to carry your own tubes which were heavy. The time felt like a good gym workout.

It was then back on the road to head south towards Maitland in New South Wales. Altogether it will be about a 800k trip which we have decided to split into two days. On the way down we hit some very torrential rain which slowed our progress along with a phenomenal amount of road works. They are twinning the remainder of the untwined Pacific Highway at a cost of $4.9 billion and are working along the entire length. We either sat on 50k or 80ph which slowed us up. 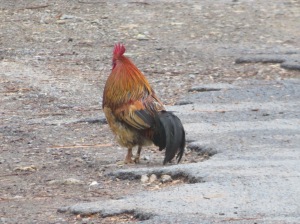 We stopped at a layby to swap drivers and came across three chooks who had taken up residency and didn’t seem bothered by all the traffic and people. Not sure how they got there in the first place – maybe escapees from a chook truck.

We only got as far as a small town called MacLean as we didn’t want to drive in the dark in wet weather. The Pacific Highway hasn’t got the best of reputations when it comes to safety and with all the huge trucks barrelling past us above the speed limit, it was time to pull in for the night.