There has been a plethora of blog postings today as up at Weemilah we had no internet due to a severed cable courtesy of a wombat!!! Yeap, honest!!! So catch up time.

After a beautiful breakfast we headed out to the view over the Kangaroo Valley for a photo op and create a wonderful but sad moment in time. It is not often that we get to catch up with so many Berlyns in one spot. 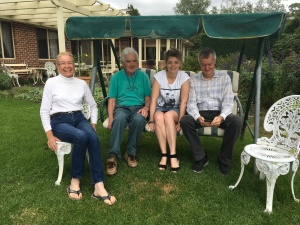 Ali heads back to the Netherlands on Tuesday and Nick back to Brisbane over the weekend. We will catch up with him in two weeks as we are couch surfing at his place for two weeks in Brisbane. 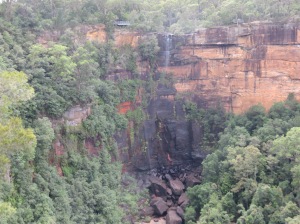 We said our fond farewells and drove a couple of kilometres down the road to Fitzroy Falls. As the picture demonstrates, not much water going over the falls at present. It has been a very hot and dry summer here but this is a little oasis due to it being up high.

We took the very steep drive down to the bottom of the Kangaroo Valley and then up the other side and then down again to the coast. We were starting to smell Suzy Suzuki’s brakes so backed off a bit to leave them to cool down. This area is a very magical part of Australia and is the play ground for a lot of Sysneyites on weekends.

This wonderful old bridge at the bottom of the steep descent is Hampden Bridge and was opened on the 19 May 1898, just six days before floods washed the old bridge away. It is the only surviving suspension bridge from the colonial period in New South Wales; and is the oldest and only timber suspension bridge still carrying vehicular traffic still in operation within Australia.

We had plans to meet Fraser’s nephew Lachlan at the Jervis Bay HMAS Creswell Officer Naval Training College where he would take us for a tour through the facility. Jervis Bay is accessible to the public and they say has the whitest sand of any beach in Australia. The colour of the water is azure and the sharks that are prolific also have dazzling white teeth. We were told the bay is well known for them.

Lachlan is normally based in Canberra but is at HMAS Creswell to help out with training of 179 new recruits. They are putting them through their paces to see who will survive and who will decide naval life is not going to be up their alley.

No, these are not some of the new trainees. The collective noun for kangaroos is a mob, troop, or court. The base is over run with these guys and lots of other wildlife and are all protected.

This is the parade ground and the mob really like this spot especially in the early evening and Lachlan informed us that they leave lots of scat behind making it some poor buggers job to clean up after them.

The setting is very spectacular and hard to get a photo without a roo or two in it. There were no naval ships in the bay today for us to have a look at but we enjoyed having a look around the grounds. 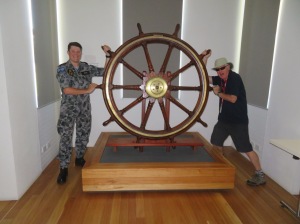 Uncle Fraser of course just had to play silly buggers. 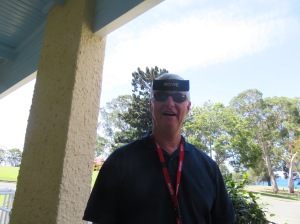 We spent about three hours with Lachlan and then it was time for us to head off the base. We are heading up to Sydney for the next five days so thought we would make a bit of a head start and get as far as Nowra. That leaves us only a two hour drive for tomorrow of which we will be freaking out as the traffic will be horrendous.

We found a reasonably priced hotel which happens to be part of a gold course.

The photo from our room is more than perfectly adequate. We are spending the night unwinding and then rewinding in time for hitting the big smoke tomorrow lunch time. We anticipate on a busy time and reconnecting as we lived in Sydney from 1989 to 1991. It was also where we got married so we have many fond memories of the place.