Much more active day which was very much needed after the last few boggy days. Paula and Dex are early risers so we were up and out the door by 9.30am to walk two blocks down the road to the Melbourne Aquarium.

The Aquarium is on the side of the Yarra River which runs through the centre of Melbourne City.

The Yarra River has been derogatively called “the river that runs upside down”, a jibe at its high turbidity. The muddy brown colour is caused by the easily eroded clay soils of its catchment area.

From the outside the Aquarium appears very small but they have cleverly built in three levels and incorporated huge tanks that you are walking around.

There were no really unusual ocean dwellers there though they had a six metre Saltie who apparently gets fed one chicken a week only which surprised us. Because the croc had been in captivity all its life and started in a croc farm it was use to being fed only if the keeper was wearing a red cap and to this day it remains the same. 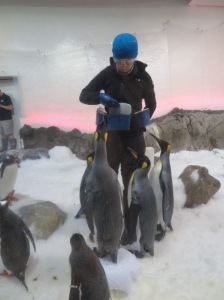 There were Emperor and King penguins in abundance and they were very habitualised which was understandable. There were also two girls in wetsuits in the penguin pool cleaning the glass using lemons that we could see clearly due to the wall of the tank being glass. There were numerous penguins giving them a very hard time by biting them on their bums, jumping onto their backs and splashing around creating a lot of turbidity. It amused the crowd more than the feeding of them.

If you look closely at the photo above you can just make out Frasers head. They had a lot of these persplex viewing bubbles that you could get a very different perspective from.

After the Aquarium and a nana nap, we caught the tram out to St Kilda which is down along the eastern side of Port Philip Bay whereas Melbourne city sits on the north of the bay. Our mission this evening was to catch up for dinner with Shelly whose apartment we are looking after for three weeks starting in the new year and to see Fairy Penguins in the wild.

Our spot for meeting was at Luna Park. It opened on 13 December 1912 and has been operating almost continuously ever since. The roller coaster opened in December 1912, and is the oldest continually operating roller coaster in the world, and one of only three roller coasters (the others being in Great Yarmouth, UK, and Copenhagen, Denmark) that require a brakeman to stand in the middle of the train. For these reasons, it is regarded as an ACE Coaster Classic. You can rest assured none of us were interested in partaking of its pleasures!

Shelly took us to a hip happening Mexican restaurant where we shared a large table with six girls. They had a Tequila shot so we challenged them by having one also but unbeknown to them, we had asked the waiter to replace the Tequila with water hoping to set up a competition. Alas, they wouldn’t take us on. When we left we told them what we had done and they got a giggle out of it.

We wandered down to St Kilda beach at 7.30pm and it was still very busy and many people were also swimming. Not surprising as it was 37c today!

Now this final photo needs some explaining. This is a night time photo of a Little Penguin. They built a breakwater at the end of the St Kilda pier 70 years ago for the 1956 Melbourne Olympic Games and they have been coming in every night since then. There are great spots all along the breakwater that they use for their burrows. Their numbers are getting stronger and at present there are about 1400 of them. The crowds are strictly controlled so as not to interfere with them and especially as they are currently nesting.

It was a very late night by the time we caught the tram home.