If there was going to be one day we really wanted beautiful it was today. Alas, we awoke to a heavy wet mist which we knew was going to limit our view as we drove along The Great Ocean Road. 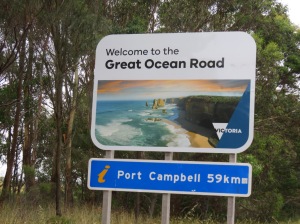 The Great Ocean Road is an Australian National Heritage listed 243-kilometre stretch of road along the south-eastern coast of Australia between the Victorian cities of Torquay and Allansford. Built by returned soldiers between 1919 and 1932 and dedicated to soldiers killed during World War I, the road is the world’s largest war memorial.

Construction on the road began on 19 September 1919, built by approximately 3,000 returned servicemen as a war memorial for fellow servicemen who had been killed in World War I. Construction was done by hand; using explosives, pick and shovel and wheel barrows. Anecdotal evidence from ABC archives in 1982 suggested workers would rest detonators on their knees during travel, as it was the softest ride for them.

The 12 Apostles is a collection of limestone stacks off the shore of the Port Campbell National Park.

Their proximity to one another has made the site a popular tourist attraction. There are eight Apostles left, the ninth having collapsed dramatically in July 2005. The name remains significant and spectacular, especially in the Australian tourism industry.

London Bridge is an offshore natural arch formation in the Port Campbell National Park, Australia. The arch is a significant tourist attraction along the Great Ocean Road near Port Campbell in Victoria. This stack was formed by a gradual process of erosion, and until 1990 formed a complete double-span natural bridge. 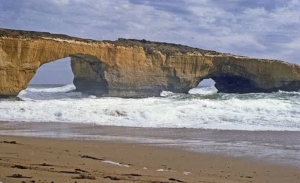 The span closer to the shoreline collapsed unexpectedly on 15 January 1990,[1] leaving two tourists stranded on the outer span before being rescued by police helicopter.No one was injured in the event. Prior to the collapse, the arch was known as London Bridge because of its similarity to its namesake.

This bay is named after the clipper ship Loch Ard, which ran aground on nearby Muttonbird Island on 1 June 1878 approaching the end of a three-month journey from England to Melbourne. Of the fifty-four passengers and crew, only two survived: Tom Pearce, at 19 years of age, a ship’s apprentice, and Eva Carmichael, an Irishwoman emigrating with her family, at 19 years of age. Pearce was washed ashore, and rescued Carmichael from the water after hearing her cries for help. Pearce then proceeded to climb out of the bay to raise the alarm to local pastoralists. After three months in Australia Carmichael returned to Europe. Four of her family members drowned that night.

Just a few of the great photos we were able to take after the mist and light rain dissipated. We have done a few scenic drives in our travels but this one has to be the best. It would be great to do this same drive on a wild stormy days to see the crashing waves against the rocks. The southern coast of Australia is the first land mass north of Antarctica and as you can imagine, it can be wild and cold.